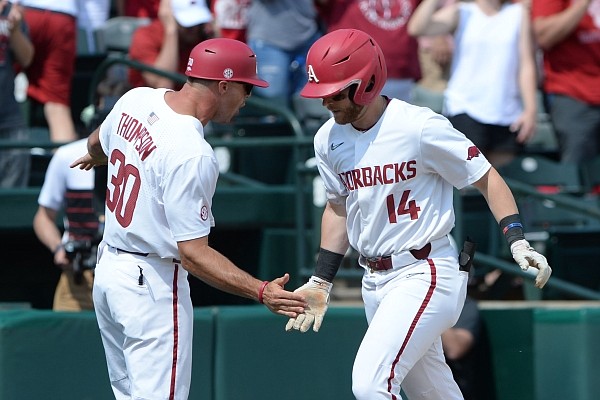 Arkansas first baseman Cullen Smith (14) is congratulated by assistant coach Nate Thompson Friday, June 4, 2021, after hitting a solo home run during the fourth inning of the Razorbacks' 13-8 win over New Jersey Institute of Technology in the first game of the NCAA Fayetteville Regional at Baum-Walker Stadium in Fayetteville. Visit nwaonline.com/210605Daily/ for the photo gallery.

FAYETTEVILLE — When NJIT jumped out to a surprising three-run lead against the University of Arkansas in Friday’s NCAA Tournament opener, the Razorbacks had the Highlanders right where they wanted them.

Arkansas rallied to win 13-8 before an announced crowd of 11,084 at Baum-Walker Stadium to advance to a matchup against Nebraska at 8 tonight. NJIT (New Jersey Institute of Technology) will play an elimination game today against Northeastern.

It was the 13th time this season the No. 1 Razorbacks (47-10) have won after trailing by three or more runs.

Before the Razorbacks got their offense fully unleashed, a defensive play by center fielder Christian Franklin in the fourth inning kept NJIT from adding to its 3-2 lead.

Kevin Kopps — named national player of the year by Collegiate Baseball this week — came in to pitch for Arkansas with two outs and runners on first and second base.

Highlanders catcher Paul Franzoni put a charge into an 0-2 pitch and drove it to the left-center field gap, but Franklin made a diving catch to prevent two runs from scoring.

“If we get two runs there and keep the momentum, who knows what happens in the game?” McClellan said. “But they make a great catch and save two runs.

“I think that play was the defining play of the game and kind of switched the momentum in their favor, and we weren’t really able to get the momentum back even though we fought very hard.”

Arkansas Coach Dave Van Horn said he initially thought Franklin would make the catch, then it looked like he wouldn’t.

“He was stretched out as far as he could go,” Van Horn said. “He was really extended. Defense wins you a lot of games, and that’s one play that helped us stay in the game and kept it a little closer.”

Franklin then led off the bottom of the fourth inning and hit a home run off NJIT starter Tyler Stafflinger to tie it 3-3. It was the start of a seven-run inning in which the Razorbacks sent 11 batters to the plate and took a 9-3 lead.

“We felt like if Kevin came in and slowed it down, maybe our guys would relax a little bit,” Van Horn said. “I guess you could say they relaxed. Whenever Kevin comes in, it seems like we score, and we did it again.”

Jake Rappaport, the Highlanders’ top reliever, replaced Stafflinger with no outs and the bases loaded in the fourth inning. Braydon Webb drew a four-pitch walk for an RBI, then Matt Goodheart’s sacrifice fly added another run.

Rappaport then gave up a three-run home to Cayden Wallace and a home run to Cullen Smith.

“It’s no big deal,” Wallace said of the Razorbacks falling behind. “Our offense can spark at any time by anybody.

“If one guy doesn’t get it done, the next guy will. I feel like that’s how our lineup rolls. We’re good from top to bottom.”

The Razorbacks also got a two-run home run by Webb in the third inning to cut NJIT’s lead to 3-2, and a home run by Jalen Battles in the fifth inning to push their lead to 10-3.

Jacob Nesbit had a two-run single in the seventh inning, and Robert Moore scored on a wild pitch in the eighth to complete Arkansas’ scoring.

The Highlanders (26-23) scored one run in each of the first three innings to take a 3-0 lead, including a home run by leadoff hitter Albert Choi off Caleb Bolden to start the game.

“Man, it was not going our way early,” Van Horn said. “But on the other hand, you’ve got to give the other team credit. They were scrappy and they were hard to strike out and whenever we made a mistake, they hit it.

Kopps (11-0 with 10 saves) is used to finishing games, but Van Horn felt on Friday he couldn’t wait to put him in.

“We needed to stop them then,” he said. “They didn’t need to score any more runs.”

Kopps — the Razorbacks’ fourth pitcher of the game after Bolden, Connor Noland and Ryan Costeiu — retired all seven batters he faced on 24 pitches.

Heston Tole then came in to pitch the seventh inning for Arkansas.

“We’re thinking we could finish this game with Kevin, and we’d all be happy,” Van Horn said. “But then we wouldn’t have Kevin for a while. So we had to roll the dice.”

“Hated to take [Kopps] out, but we’re trying to win the tournament,” Van Horn said. “We’re probably going to need him for the next game or two.

“Just kept going with guys, and it didn’t go good with a couple of them, obviously.”

Wallace said he wasn’t worried when Kopps had to come into the game in the fourth inning.

“I knew we had a good plan,” Wallace said. “We trusted Coach. It worked out pretty well.”

The Razorbacks won their ninth consecutive game and ended the Highlanders’ winning streak at nine games.

“It was a good win,” Van Horn said. “Bottom line, this time of year, find a way to win and hopefully we’ll do a little better [today].”

McClellan said he wasn’t surprised both teams put their closers into the game in the fourth inning.

“I think it’s just playoff baseball,” McClellan said. “You’re doing everything you can to win the game. Every game matters.

“I think it just goes to show how much each team believes in their guy, and they just got the better of us today with their guy.”