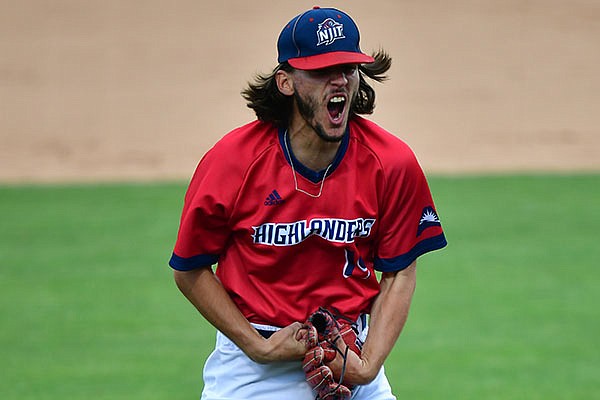 NJIT pitcher Jake Rappaport celebrates after recording the final out of an NCAA regional game against Northeastern on Saturday, June 5, 2021, in Fayetteville.

FAYETTEVILLE — Before NJIT played Northeastern on Saturday in an NCAA Tournament elimination game, Highlanders Coach Robbie McClellan huddled up with his players and reminded them Ryan Fischer would be the team’s starting pitcher.

“Fish kind of has a saying that I can’t really say on air right now,” McClellan said on a Zoom conference after NJIT stayed alive with a 3-2 victory over Northeastern at Baum-Walker Stadium. ” ‘baddest dude on the planet’ sort of thing.

“That’s how he feels when he touches the ball, and that’s how we feel when he’s on the mound.”

Fischer, a sophomore right-hander from Whitehouse Station, N.J., went 7 innings and held the Huskies to 4 hits, 1 run and 1 walk with 4 strikeouts.

“It’s more of a confidence thing,” Fischer said of his pregame saying. “I just want to stay confident in myself. I feel like that’s when I succeed the most. If I lose that mentality, that’s when I get into some trouble.”

“In my bullpen, I was getting really frustrated because I didn’t have anything working,” Fischer said. “I just kept that ‘baddest dude on the planet’ mentality, and once I got out there I stayed calm and it just worked out in my favor.”

Fischer said he had his fastball and slider working and also mixed in some changeups.

“He just attacked the zone all day long,” Northeastern designated hitter Scott Holzwasser said. “It was hard to get the barrel on the ball.”

Fischer got 11 batters on popups or flyouts.

The Huskies pulled within 3-1 with a run in the seventh inning, and Max Viera’s home run in the eighth inning off Highlanders closer Jake Rappaport made it 3-2.

Rappaport retired the Huskies (36-12) in order in the ninth inning for his 11th save.

“Jake gave up a solo home run, and I’m OK with that,” McClellan said. “You’re up 3-1. You want to force contact. You don’t want to be passive.

“I thought the ninth inning, when we needed him, he was there for us. He’s been our guy all year.”

“It’s an amazing accomplishment for our team and our coaching staff,” McClellan said. “I kind of caught myself getting a little emotional in the ninth inning, just thinking about how far the team has come from the start of the season.”

NJIT gave Arkansas a tough game Friday before the Razorback rallied to win 13-8.

“A lot of people counted us out, but we’re a good ballclub,” Fischer said. “We can all play. I think this win today and the game [Friday] showed a lot of people what we’re about.”

McClellan said he believes the Highlanders, who won the America East championship, proved they belong in the NCAA Tournament.

“We think we have a really good team,” he said. “We play hard, and when we do things correctly — throw strikes, play defense — we think we have enough offensively to compete with anybody.

“I know we don’t have a ton of name-brand recognition, but I think that’s what’s been great about getting to a regional. People are seeing us on the national stage for the first time, and I think they’re pleasantly surprised by how well we play baseball.”

“From last year to this year, he’s just made a huge jump. He’s one of the hardest workers we have,” McClellan said. “He’s always trying to get better and learn more.

“My favorite thing about him is he’s just such a great competitor. I thought for the first time on the big stage for him, it was about as good as you could expect.”