Razorbacks are strong up the middle 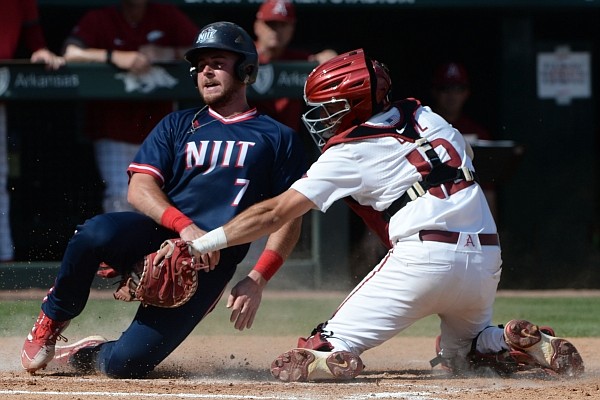 Arkansas catcher Casey Opitz tags out New Jersey Institute of Technology catcher Paul Franzoni Friday, June 4, 2021, after fielding the throw from right fielder Matt Goodheart during the seventh inning of the Razorbacks' 13-8 win over in the first game of the NCAA Fayetteville Regional at Baum-Walker Stadium in Fayetteville. Visit nwaonline.com/210605Daily/ for the photo gallery.

Individually he’s coached some that rival each.

“But as far as four athletic guys in the middle, I’d say this is the best,” Van Horn said. “I think it’s a huge part of our success.”

The Razorbacks started Friday’s Fayetteville Regional at Baum-Walker Stadium as the 46-10 SEC season/SEC Tournament champions and No. 1 national seed.

“You always hear that defense wins you championships, especially in football,” Van Horn said. “It’s that way in baseball if you’ve got guys up the middle. We said we’re going to be as good as anybody in the country up the middle if they stay healthy, and that’s kind of what’s gone on.”

“You start with Casey Opitz,” DeBriyn said. “Like when he nailed that really fast freshman (Vanderbilt’s Enrique Bradfield) trying to steal third. He got rid of it right on the money. He’s so intuitive. Dave Van Horn’s been around and seen a lot. For him to say that’s the best catcher in the country, that’s saying something.

"And you’ve got Moore and Battles up the middle, that’s a great double-play combination plus the ground they cover. And Franklin in center field -that’s pretty good stuff right there.”

Only Larry Wallace, with such range that DeBriyn heeded assistant coach Doug Clark’s suggestion to play Wallace at shortstop and move junior college transfer shortstop Ray to second, never got a pro whiff.

“I guess it was his impairment,” DeBriyn lamented.

Wallace played while deaf. It didn’t impede his Arkansas success nor impede the coach they called “Stormin’ Norman” from yelling at him like any other upon spotting something amiss.

Off Norm’s shouting during Wallace’s 1976 freshman year, DeBriyn recalled veteran infielder Ralph Bradbury deadpanning: “He just won’t listen to you will he?”

Actually Wallace listened very well reading lips. He gave as good as he got in the 1979 repartee that DeBriyn senses these 2021 Hogs share along with their spectacularly sound up the middle defense.

“I talked to Van Horn about this club,” DeBriyn said. “What he says reminded me a little about that ’79 team. Very competitive. Kind of with a mind of its own. A little bit of an attitude in a good way.

"They like each other and are very close within themselves.”