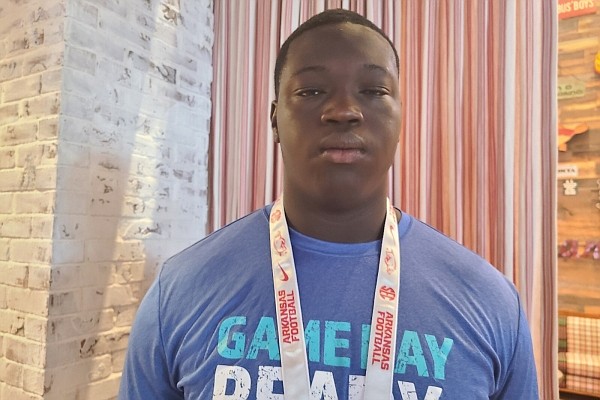 Jones (6-4, 330), who has official visits planned to LSU, Florida State and Tennessee as well, was impressed with his official visit to Fayetteville.

“It was fun,” Jones said. “I saw a lot of things I needed to see. I saw the brotherhood of the team. I saw a whole bunch of things that stood out to me.”

“The highlight was when we hung out with the team and see how they do things, how they approach things and how they kind of hang around each other," he said.

It is that brotherhood that he is looking for in a program.

“I'm looking for the brotherhood of the team,” Jones said. “Kind of seeing in the locker room if they are together and not broken apart. Seeing if everyone can hang out together.”

Many expect him to stay close to home and play for LSU.

“I don't think that (impacts) me,” Jones said. “I talked to my coach and he said to make the decision based off the best college for you, not based off what people are telling you.

"I think it will be a me decision and not a peer-pressure decision.”

“It went real good,” Jones said. “We've actually got a coaches meeting today. Go talk a little football, see how they coach and approach it.”

Jones sized up his game.

“My strength is being versatile, being able to move around and be able to block anybody,” he said. “The bigger guys, smaller guys and quicker guys, that is one of my biggest strengths.

He has at least three other official visits scheduled at this point.

“I've got Tennessee in two weeks,” Jones said. “Florida State after that and then I'm going to take my OV to LSU.”

He can see himself at Arkansas after the visit.

“With the team and how they bonded, I love that type of stuff," he said. "They are recruiting me to play tackle.”