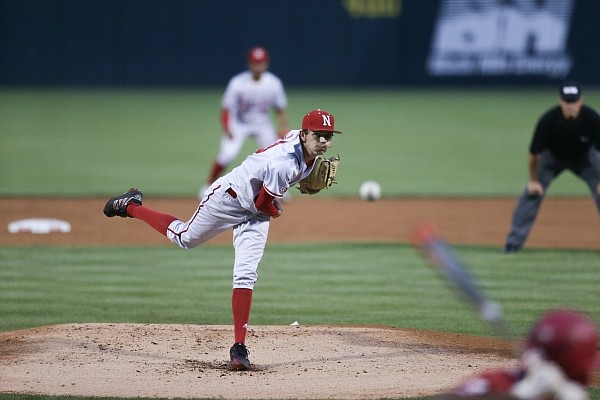 Nebraska Chance Hroch (13) pitches, Saturday, June 5, 2021 during the first inning in the second game of the NCAA Fayetteville Regional at Baum-Walker Stadium in Fayetteville. Check out nwaonline.com/210606Daily/ for the photo gallery.

FAYETTEVILLE — No team in the Big Ten — and not many teams nationally — walked fewer batters than Nebraska this season.

The Cornhuskers entered Saturday night’s game against Arkansas averaging 3.25 walks per nine innings, which was the 25th-lowest figure in college baseball. They had not walked more than three batters in their past six games.

Nebraska struggled to pitch into home plate umpire Kellen Levy’s strike zone Saturday, however, when the Huskers walked 10 Razorbacks during a 5-1 loss to Arkansas at Baum-Walker Stadium.

The 10 walks tied a season high for Nebraska, which was set previously during a 7-6 victory over Indiana on May 8.

Unlike the Indiana game, Nebraska was not able to overcome the high walk total against Arkansas. Walks contributed to four of the Razorbacks’ runs, including both of Arkansas’ runs during a two-run sixth inning that extended the lead to 5-1.

Franklin drew a bases-loaded walk against Jake Bunz to put Arkansas ahead 4-1 in the sixth. Wallace scored on a passed ball by backup catcher Griffin Everitt on the next pitch.

“We had some high-leverage guys in the game and weren't able to finish it off on the mound,” Nebraska coach Will Bolt said.

Bunz failed to record an out and walked all three batters he faced during the bottom of the sixth. Nebraska had gained some momentum in the top of the inning with a two-out RBI single against Arkansas closer Kevin Kopps.

“The hitters did a good job,” Van Horn said. “They were very patient, worked a couple of tough walks at the beginning of that inning.

“We ended up getting a walk and a (passed ball) and we punched in two. That gave us a little breathing room.”

After Charlie Welch singled to lead off the second inning, Jalen Battles walked with one out to move Welch into scoring position. Braydon Webb singled in the next at bat to put the Razorbacks ahead 2-0.

Matt Goodheart followed Webb’s single with a walk to load the bases, and Wallace extended Arkansas’ lead to 3-0 on the first pitch he saw.

“They threw an assortment of pitching at us,” Goodheart said. “What it comes down to is seeing it in the zone and hunting a pitch and hitting it."

Franklin, Wallace and Battles each drew two walks for the Razorbacks. Goodheart, Smith, Moore and Welch drew one walk apiece.

The 10 walks were the most taken by Arkansas since April 14, when the Razorbacks walked 11 times in six innings against Arkansas-Pine Bluff.