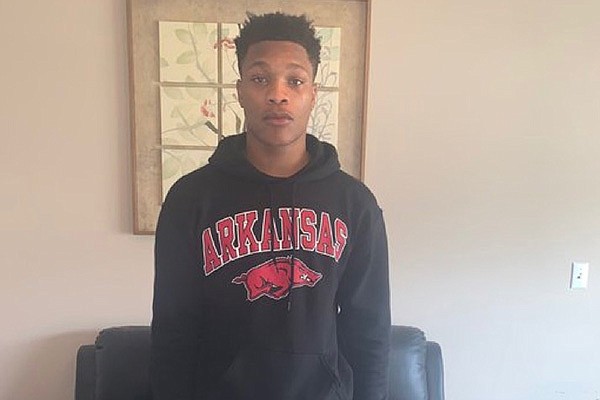 Highly recruited ESPN 4-star prospect Myles Rowser committed to the Razorbacks in March sight unseen, but after his official visit to Fayetteville this weekend he has no doubts about his decision.

"Nothing changed from over the phone with the coaches as far as their personality,” Rowser said. “This official visit was reassurance. Everything seems to be what they said it was and I like it. I love it.”

Rowser, 6-1, 185 of Belleville, Mich., announced a top four of Arkansas, Michigan State, Alabama and Kentucky on March 8 before pledging to the Razorbacks 20 days later.

"The highlight of the trip was me and Coach (Sam) Pittman,” Rowser said. “Me and my parents met with him. It was a great talk.”

The traditional Friday night dinner at the Catfish Hole was a hit.

“It was great food. Everything was great,” Rowser said.

Donald W. Reynolds Razorback Stadium stood out, along with the coaches.

“First, the coaches, they like to talk to you and make relationships with you,” Rowser said. “Coaches that I hadn't even met yet, they'd come up and talk to me. I didn't even know that they knew me. Basically talked to my parents, started a relationship with me and gave me their card.”

Cornerbacks coach Sam Carter was a big reason why Rowser decided to be a Razorback.

HIs mother was also reassured about her son’s commitment after the trip.

“She loved it before we came, but just coming down here and actually seeing it, it was better,” Rowser said.

Rowser played the role of recruiter during the weekend.

"I feel like we've got everybody wanting to commit, it's just a matter of when,” he said.

He has no plans to visit other schools.