Slavens will be in lineup Sunday night 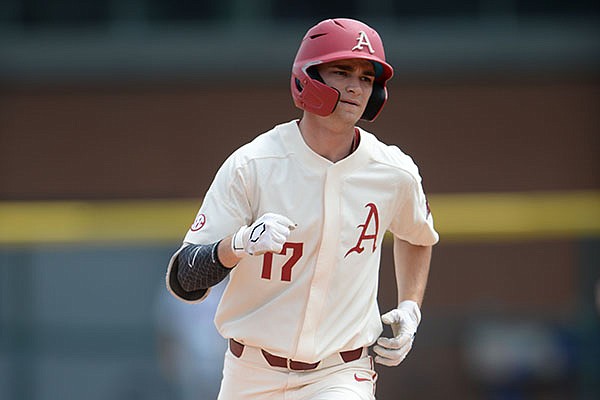 Arkansas first baseman Brady Slavens runs the bases after hitting a home run during a game against Florida on Saturday, May 22, 2021, in Fayetteville.

Slavens has been held out of the Razorbacks' last five games with a sprained ankle that he suffered during a May 26 game against Georgia at the SEC Tournament.

The timetable for Slavens' return was set for one to three weeks after a negative X-ray the day following the injury.

Arkansas coach Dave Van Horn said Saturday that Slavens is “right there” in terms of returning to action. Slavens was running the bases and taking batting practice in regular group work prior to Saturday's game against Nebraska.

Slavens also ran on the field without a walking boot prior to Friday's game against NJIT.

"He could have almost gotten some at bats tonight,” Van Horn said following the Razorbacks' 5-1 victory over Nebraska on Saturday.

Slavens, a semifinalist for the Dick Howser Trophy as national player of the year, leads the Razorbacks with 60 RBI. He is tied for team leads with 13 home runs and 3 triples.

With Slavens back at first base, Cullen Smith will move to third base for Sunday's game. Smith hit four home runs in six games while playing first base in place of Slavens.

Cayden Wallace, who played third base in place of Smith, will move to left field.