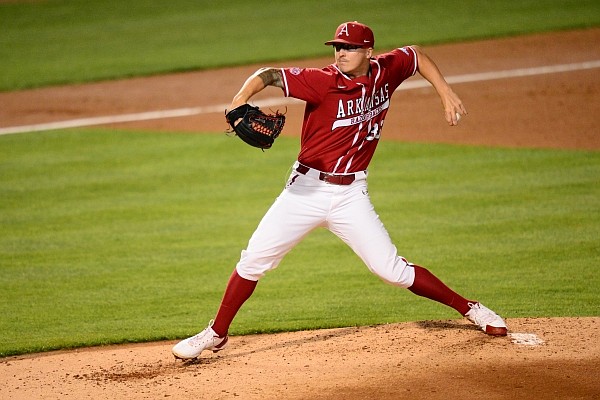 Arkansas pitcher Patrick Wicklander throws a pitch during a game against Nebraska in the NCAA Fayetteville Regional at Baum-Walker Stadium on June 5, 2021.

FAYETTEVILLE — Arkansas starter Patrick Wicklander pitched only five innings Saturday, but he stabilized the Razorbacks' pitching staff after a shaky start to the NCAA Fayetteville Regional.

Wicklander allowed 1 run and 2 hits, walked 2 and struck out 7 during Arkansas' 5-1 victory over Nebraska.

One day after the Razorbacks used seven pitchers against NJIT, Wicklander and Kevin Kopps combined to hold the Cornhuskers to five hits. Nebraska struck out 13 times.

"That’s exactly what we were planning on doing tonight," Arkansas coach Dave Van Horn said, referencing the two-pitcher approach with Wicklander and Kopps.

"You've got to feel good about it. Rest everybody else and tomorrow we’ll see who we’re playing, and then go from there."

Wicklander wasn't dominant Saturday, but he did just enough to keep Nebraska off balance.

"He came at you with three pitches — a slider, a curveball and a good fastball," Nebraska's Luke Roskam said. "He just attacked you."

Wicklander threw first-pitch strikes to 12 of the 19 batters he faced, but Nebraska fouled off 20 pitches to raise his pitch count.

"I thought both teams did a nice job fouling pitches off and getting to the next pitch," Van Horn said. "There were a lot of pitches thrown tonight."

Wicklander threw 82 pitches through four innings, but was efficient during a seven-pitch fifth inning against the bottom of the Huskers' lineup.

Van Horn took Wicklander out of the game after he allowed a sixth-inning leadoff single to Joe Acker on his 92nd pitch.