Arkansas vs. Nebraska: How to watch and listen, forecast, team comparisons 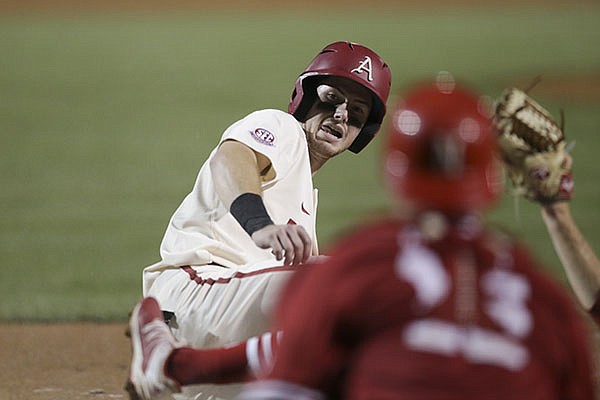 Arkansas' Matt Goodheart slides into home plate during an NCAA regional game against Nebraska on Sunday, June 6, 2021, in Fayetteville.

TELEVISION The game will be televised by ESPNews initially, then will move to ESPN2 once the Ole Miss-Southern Miss game ends. The game can be accessed via WatchESPN.com and the ESPN app (carrier login required).

FORECAST According to the National Weather Service, there is a 70% chance of rain Monday night in Fayetteville. The high will be 79 degrees and the low will be 66.

NOTABLE The winner of Monday’s game will advance to play North Carolina State in the super regional round….Arkansas defeated Nebraska 5-1 on Saturday. The Cornhuskers defeated the Razorbacks 5-3 on Sunday….Arkansas has played one less game than Nebraska during the regional. The Cornhuskers will be playing their fifth game in four days, while the Razorbacks will be playing their fourth game in four days….Arkansas starting pitcher Jaxon Wiggins is throwing for the first time in the regional. Nebraska will start its No. 1 pitcher, Cade Povich, who threw 3 1/3 innings during the Huskers' regional opener against Northeastern three days ago....Arkansas is the No. 1 overall seed in the NCAA Tournament. The Razorbacks are attempting to become the first top seed to win the national championship since Miami in 1999….Top overall seeds have advanced to the College World Series 14 times since 1999 and only three have failed to advance past their home regional….Tickets for the Fayetteville Regional are sold out, with the exception of a limited number of general admission tickets for students that are being sold on the day of games….Arkansas is 28-6 at Baum-Walker Stadium this season. The Razorbacks have a 136-27 record at home since the start of the 2017 season….Arkansas is hosting a regional for the ninth time and for the fourth consecutive postseason. The Razorbacks won home regionals in 2004, 2010, 2018 and 2019.