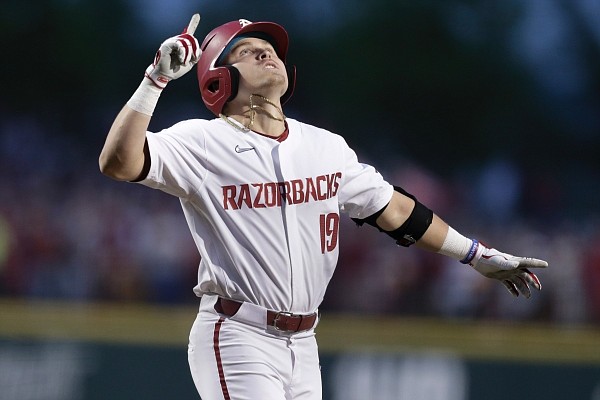 Arkansas catcher Charlie Welch (19) runs home following his home-run, Monday, June 7, 2021 in the eighth inning of the NCAA Fayetteville Regional at Baum-Walker Stadium in Fayetteville. Check out nwaonline.com/210608Daily/ for the photo gallery.

FAYETTEVILLE — Arkansas director of video and scouting Zach Barr shouted at Charlie Welch moments after Welch finally took a seat in the Razorbacks’ dugout in the eighth inning Monday.

Arkansas’ pinch-hitting extraordinaire had just written the latest chapter in what has been a storybook season littered with memorable moments. His towering three-run home run into the seats behind the Razorbacks’ bullpen in left field topped them all.

It provided Arkansas and star reliever Kevin Kopps a 6-2 lead that held up and punctuated a dizzying four-run inning — all with two outs — that ultimately sealed the NCAA Fayetteville Regional title over Nebraska.

“I mean, you could feel it on your body,” Welch said. “It’s so loud you’re shaking. Your helmet is trembling. I’ve never experienced that.

As he has been much of the season, Welch was prepared for his plate appearance off the bench. When the Cornhuskers turned to left hander Jake Bunz after righty Koty Frank fell behind 2-0 to Razorbacks catcher Casey Opitz, Van Horn looked his way.

Welch was in line to pinch hit should Opitz reach. He did after the first two pitches from Bunz missed the zone.

“A couple of pitches later he was there and ready to go,” Van Horn said. “He laid off a bad pitch and you saw what he did to that (third) pitch. He hit it as hard as you can hit it.”

Given that Nebraska pitchers had thrown 11 consecutive balls prior to his home run, Welch assumed when he turned to Van Horn for a signal that he would get a take sign. With both hands, the coach motioned to swing away.

The first Huskers pitch to find the plate over the course of three batters wound up sending fans in Baum-Walker Stadium into a state of delirium.

“I got what I was looking for: a fastball down the middle,” Welch said. “I hit pretty well.”

Kopps, who was masterful over a career-long seven innings and earned his 12th win of the season, said there is something about Welch that allows him to simply get the job done.

Welch is 8 for 12 this season as a pinch hitter, including 3 for 3 two weeks ago against Florida. He had the game-winning hit off the bench in the second game of that series to clinch the Razorbacks' first SEC championship in 17 years.

And for his play over the four-day regional, Welch was named to the Fayetteville NCAA All-Regional team.

“We were waiting for it all game. We knew it was coming,” Kopps added. “I always feel good when Charlie steps into the box. He has a tough role coming in in those big situations.

“It's amazing. You just have so much confidence in him.”