Huskers got most out of players at end of long day 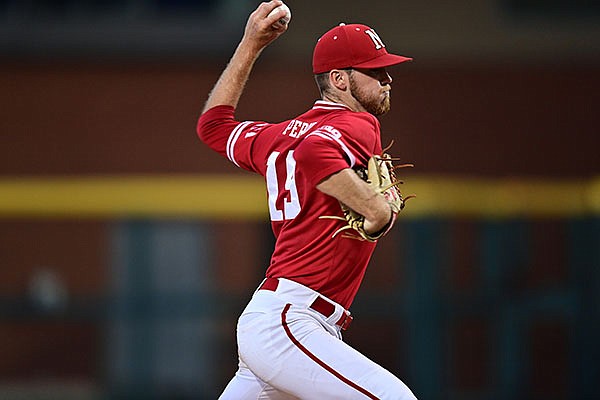 FAYETTEVILLE — It’s the oldest cliché in sports: The team that plays the hardest wins the most.

Sometimes playing hard leads to aggressive mistakes and won’t effect the outcome. That seemed to be the saving grace for No. 19 Nebraska in a 5-3 victory over No. 1 Arkansas on Sunday night at Baum-Walker Stadium.

The Cornhuskers staved off elimination in the NCAA Fayetteville Regional despite running into two double plays on line outs, making outs at third and home plate to hurt rallies, and giving up two runs on a wild pitch.

The Razorbacks could not take advantage because they committed three errors, made pitching mistakes on two-strike counts and succumbed to superb pitching.

Schwellenbach, the starting shortstop, matched his season high with 65 pitches. He was running on fumes at the end, but still managed to strand the tying runners with two outs to end the game.

It sets up a do-or-die championship game at 6 p.m. Monday. Both coaches expect their teams to step up with great effort, the trademark of their teams all season en route to league championships.

“We are always confident –— we have been all year,” Arkansas coach Dave Van Horn said. “Win or lose, we are going to play hard tomorrow. I guarantee that.”

Huskers coach Will Bolt, who played for Van Horn at Nebraska, sounded like his mentor as he described the aggressive play that sometimes led to mistakes.

“Win or lose, you have to have that,” Bolt said. “You've got to have some dog, no matter what when it’s about to be a throw down.

“We came here to compete, but we didn’t just come to do that.

“The message (after the game) was that we are going to keep coming. It’s what we’ve asked all year.”

The Cornhuskers got some spark in the first inning when lefty starter Perry smoked the Hogs with a rising fastball that Van Horn said produced swings and misses.

“It was a high spin fastball,” Van Horn said. “It looks good, but it stays up and we were under it.

“They gave us two runs with the wild pitch and the throwing error. We didn’t do much.”

The Hogs managed only five hits in the victory over Nebraska on Saturday, then only four Sunday.

“We have not swing the bats well,” Van Horn said. “We are facing good pitching and, obviously, a team that knows how to win in Nebraska. We have to be better.”

“We will come out and play like we know how to play,” Noland said. “We’ve been here before.”

Noland said there won’t be a shortage of ready arms. Kevin Kopps, the nation’s top reliever, did not pitch Sunday and should be ready to close.

“Every pitcher on our staff has something still in the tank,” said Noland, who added that Kopps “is the best pitcher in the country.”

Bolt said there is no shortage of arms for the Cornhuskers. They won two games Sunday but didn’t use many pitchers.

“We will go back (to the hotel) and pick up the pieces after this one,” Bolt said. “But we had several guys who didn’t throw. To use just five guys in a doubleheader is rare. We have a lot of fresh arms.”

The Hogs will have to get more out of the heart of their lineup. Cleanup hitter Brady Slavens returned after sitting out 10 days with an ankle injury suffered at the SEC Tournament.

“We hope to have a better night tomorrow.”