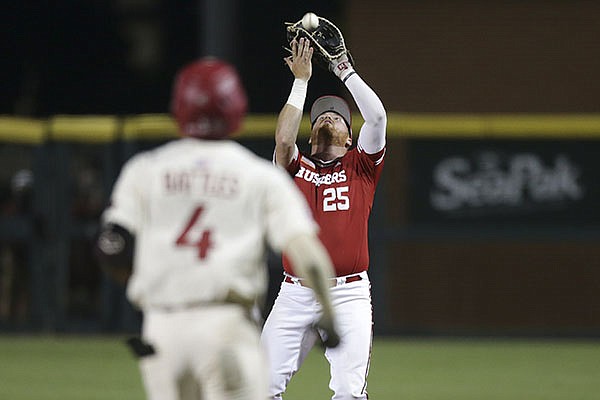 Nebraska first baseman Luke Roskam (25) catches a pop up from Arkansas' Jalen Battles to give the Cornhuskers a 5-3 victory over the Razorbacks on Sunday, June 6, 2021, in Fayetteville.

FAYETTEVILLE — Spencer Schwellenbach showed the University of Arkansas late Sunday why he was chosen as the Big Ten player of the year.

The two-way star played a key role in the middle of No. 19 Nebraska’s go-ahead fifth inning and he tamed the No. 1 Arkansas lineup with 4 2/3 shutout innings to lead the Cornhuskers to a 5-3 win before a crowd of 11,084 at Baum-Walker Stadium.

Schewellenbach (3-1) carved up the Razorbacks for five strikeouts in his longest outing of the season and dropped his ERA to 0.57, which is lower than the UA’s Kevin Kopps’ NCAA-best 0.74, but he does not have enough innings to qualify for the NCAA statistics.

Kopps was warming up in the Arkansas bullpen after Schwellenbach walked Christian Franklin and Cullen Smith to bring up the go-ahead run in the top of the ninth, but the hard-throwing right-hander struck out Casey Opitz and retired Jalen Battles on a pop-up to first base after falling behind 3-0 to escape the jam.

“I was running out of gas,” Schwellenbach said. “My whole body was sore. That was probably my longest outing of the year.”

“Schwellenbach was really good today,” Van Horn said. “We had a chance to get him on the ropes a couple of times and he didn’t let us, especially in the ninth inning. He made some really good pitches when he needed them.”

Nebraska Coach Will Bolt said the pitching plan worked out exactly as the Cornhuskers coaches had planned.

“Schwelly gave us everything he had, every last drop of his being,” Bolt said.

Nebraska (34-13) forced a winner-take-all championship game today at 6 p.m. at Baum-Walker Stadium. The Razorbacks (48-11), who had their 10-game winning streak snapped, will be the home team for the final at a regional in which the designated home team has won all six games.

The Cornhuskers will have to do what no team has done against Arkansas since Texas A&M late in the 2019 season: Win a weekend series against the Razorbacks.

Arkansas has won all 15 of its weekend series this year. The Razorbacks will carry a 12-3 postseason record at Baum-Walker Stadium since 2018 into the regional final.

“We’re always confident,” Van Horn said. “We’ve come through most of the time … but we have to play a lot better than we did tonight.”

The Razorbacks committed a few defensive misplays, some of which assisted in two of Nebraska’s scoring innings.

Nebraska center fielder Jaxon Hallmark got the scoring started with a first-inning home run to center field, his ninth, and the third consecutive Arkansas game with a home run in the first inning.

The left-hander Perry struck out four of the first five batters, making effective use of a high fastball, and shut the Razorbacks out through two innings before running into trouble in the third.

The uprising started with Jalen Battles’ one-out walk. Matt Goodheart singled him to second base.

Cayden Wallace drove a ball over shortstop into left-center field, easily plating Battles, and a misplay in center field by Hallmark allowed Wallace to hustle into second base as Goodheart took third.

Perry quickly got ahead of Brady Slavens, but his 0-2 pitch sailed over the left-handed hitter’s head. The Cornhuskers appeared to catch a break when the ball caromed quickly back to catcher Griffin Everitt, but Perry could not hang onto his toss covering home plate and Goodheart slid in safely.

Seeing the loose ball, Wallace motored around third base and beat the shortstop Schwellenbach’s throw back to home to complete the two-run mistake and give Arkansas a 3-1 lead.

The Cornhuskers capitalized on an Arkansas error, a throw by third baseman Cullen Smith, to cut its deficit in the bottom of the third. Joe Acker doubled after Smith’s error allowed nine-hole hitter Logan Foster to reach. Hallmark followed with a sacrifice fly to make it 3-2.

The Razorbacks had a chance to add to their lead in the fifth but could not capitalize after Battles walked again and Goodheart chased him to third with a one-out single.

Bolt called on Schwellenbach, and he delivered immediately by striking out Wallace and retiring Charlie Welch on a fly ball to center field.

The Cornhuskers took advantage of a big break against Lael Lockhart (3-3) in the bottom of the fifth to seize the lead. With one out, Acker hit a two-strike pitch into left-center for a single. Hallmark followed with what could have been a double play ball as the Razorbacks had him played up the middle, but the ball bounced off Lockhart and his flip to first base was late.

Schwellenbach hammered a 1-2 pitch that had too much of the plate into left-center field to tie the game and Wallace’s throw to third base allowed Schwellenbach to take second.

That proved costly moments later. After reliever Ryan Costieu fanned Luke Roskam, Everitt went the other way to right field to bring home both runners for a 5-3 lead that wound up being the final runs of the evening.