Slavens returns after 5 games away 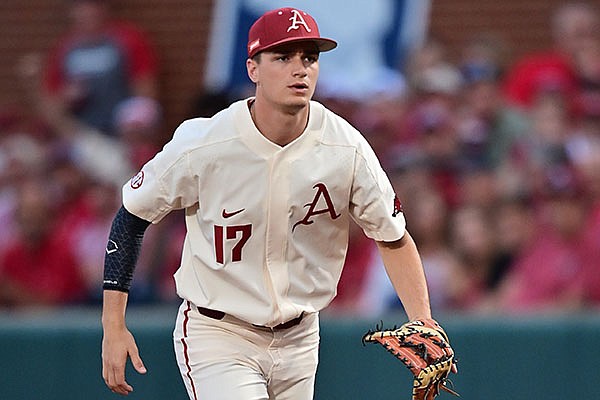 Arkansas first baseman Brady Slavens is shown during an NCAA regional game against Nebraska on Sunday, June 6, 2021, in Fayetteville.

FAYETTEVILLE — University of Arkansas first baseman Brady Slavens was back in the starting lineup on Sunday night against Nebraska and making an impact after missing the last five games with a high ankle sprain.

Slavens struck out in his first three plate appearances, but he made two perfect throws in the third inning to retire aggressive Cornhusker base runners.

Slavens threw home and catcher Casey Opitz applied the tag to nail Joe Acker, who was running on contact from third base on a ground ball with one out.

Moments later, Nebraska’s Luke Roskam beat out a long throw to first base from shortstop, but Slavens eyed Spencer Schwellenbach trying to take third base, fired to pitcher Lael Lockhart covering the bag and got the out call as the Cornhuskers ran themselves out of the inning.

Slavens had 60 RBI when he turned his right ankle as his cleat slipped off first base while running out a ground ball in the Razorbacks’ SEC Tournament opener against Georgia on May 27.

Slavens entered the game as one of five Razorbacks with a team-high 13 home runs, and he was slotted in the cleanup spot, where he had started 26 previous games.

Coach Dave Van Horn said late Saturday that Slavens was on the brink of being able to play.

“He’s right there,” Van Horn said. “He could have almost gotten some at bats tonight. Ran the bases today inside. Took batting practice with the team in regular group work.”

Nebraska’s mistakes gifted Arkansas two runs to break a 1-1 tie in the top of the third inning. With Brady Slavens in an 0-2 hole, and runners at second and third, lefty Kyle Perry unleashed a wild pitch well over Slavens’ head.

The ball bounced cleanly and quickly back to catcher Griffin Everitt, whose toss to Perry covering the plate was not caught, allowing Matt Goodheart to score. The ball dribbled toward shortstop as Cayden Wallace raced around third and beat the throw home for two runs.

Each game involving the Arkansas Razorbacks has featured a first-inning home run.

NJIT’s Albert Choi homered as the leadoff batter on an 0-2 pitch from Caleb Bolden in the Razorbacks’ 13-8 win in the tournament opener.

The Cornhuskers’ Jaxon Hallmark hit a 2-2 Lael Lockhart offering over the center-field wall in the bottom of the first inning on Sunday.

The Razorbacks turned an uncommon double play to get out of a jam in the second inning after catcher Griffin Everitt singled and Cam Chick reached on a Jalen Battles error to open the inning.

Lael Lockhart struck out Brice Matthews, who was trying to lay down a bunt. Then, when Mojo Hagge drilled a line drive to left field, Matthews was caught straying nearly to third base, perhaps thinking the ball would drop. Instead, Cayden Wallace grabbed the liner and threw a one-hopper to second base to Robert Moore to complete a 7-4 double play.

Nebraska right fielder Joe Acker was a double shy of hitting for the cycle against NJIT. Instead of Acker getting a double in his last at-bat in the eighth inning, he hit into a double play.

Acker said after he hit a triple in the first inning, a home run in third and a single in the fourth, he became aware he was close to hitting for the cycle.

“Nobody let me know in the dugout,” Acker said. “I think it was actually an older man, an Arkansas fan, that let me know.

“I wasn’t even thinking about it until he said something to be honest with you. I was like, ‘Oh yeah, shoot, I am just a double away.’”

Acker walked in the fifth inning, then singled again in the sixth.

While Arkansas was the visiting team, the Razorbacks were in the third-base dugout as usual.

Nebraska third baseman Max Anderson appeared to injure a hamstring while stretching to reach first base to beat out a ground ball out late Saturday and he wasn’t available for Sunday’s two games.

“Doesn’t look good,” Nebraska Coach Will Bolt said late Saturday. “We obviously had to take him out of the game so it doesn’t look promising.

NJIT Coach Robbie McClellan and catcher Paul Franzoni said the Highlanders appreciated all the love from Arkansas fans this weekend.

“Looking back, it’s been an amazing experience,” McClellan said. “I’m definitely happy that we got sent here.”

Arkansas fans were respectful of the Highlanders after they lost 13-8 to the Razorbacks and pulled for them against Northeastern and Nebraska.

“I think hands down this has probably been the best experience of my life, doing it with the guys that I consider my brothers and family,” Franzoni said. “The Arkansas fans have been truly unbelievable. I can’t thank them enough for welcoming us with open arms.

“We all feel so blessed that we got chosen for this regional. I can’t say enough about how great the Arkansas fans have been here. They really took us in this week and treated us like family.

“We’re very thankful for that. It’s impressive considering we were competing against Arkansas in game one, and then they took us under their wing and supported us against Northeastern and Nebraska.”

After the Highlanders beat Northeastern 3-2 on Saturday, they visited with fans in the Hogpen during the Arkansas-Nebraska game.

“That was crazy,” Franzoni said. “We got escorted out there and we felt like celebrities.

“There were NJIT chants. I think I gave a thousand fist bumps walking around the stadium and took probably 50 pictures. I know our guys loved it.”

“Our kids and their families and NJIT baseball will have ever-lasting memories,” McClellan said. “It just seems like both fanbases got along really well and they kind of took to us.

“The people of Fayetteville definitely know what they’re doing and we were proud to be part of the regional.”

Nebraska catcher Luke Roskam had an RBI single against Arkansas relief pitcher Kevin Kopps on Saturday but still came away impressed after the Razorbacks’ 5-1 victory.

“Honestly, you don’t see the spin on the ball,” Roskam said. “That cutter/slider thing is pretty good. It’s got late break. The first one I took started in the other batter’s box and broke in. That’s honestly the pitch I hit on the 3-2 pitch. So seeing that the first time actually helped me.

“But the cutter really works off of his fastball, so he can really surprise you with the fastball. A lot of us are seeing cutter and for a good reason. It’s a really good pitch.”

Nebraska second baseman Cam Chick hit his second inside-the-park home run of the season when he drove the ball off the wall in left-center field in the Cornhuskers’ 18-4 victory over NJIT on Sunday.

The ball hit hard off the wall and bounced past NJIT outfielders Albert Choi and Julio Marcano.

Chick, running hard out of the batter’s box, sprinted around the bases and slid home safely ahead of a throw to the plate.

Chick’s three-run home run was part of an eight-run inning that increased their lead to 10-1.