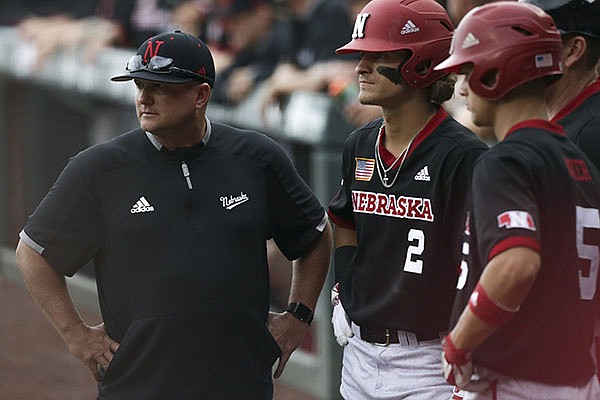 Nebraska coach Will Bolt (left) talks with players during an NCAA regional game against Arkansas on Monday, June 7, 2021, in Fayetteville.

FAYETTEVILLE — When you put two Power 5 conference champions together in the same NCAA baseball regional, you expect fireworks.

That happened Monday night as SEC champion Arkansas hit Big Ten champion Nebraska with a two-out, four-spot in the eighth inning to take a 6-2 win and the NCAA Fayetteville Regional title.

The win before 11,084 fans at Baum-Walker Stadium pushed the Razorbacks (49-11) into a super regional this weekend against North Carolina State (33-17). It ended the season for the Cornhuskers (34-14).

Nebraska coach Will Bolt, who played for Arkansas coach Dave Van Horn while Van Horn was the Cornhuskers' head coach, would love to see his mentor win it all this season.

"I think they have a great shot,” Bolt said. “They haven't lost a series all year. They've got a lot of talent, a great coaching staff. They've got everything you need. They play great defense. They're athletic and they obviously can beat you in a bunch of different ways.

“They've got a great team, and I'd love to see Coach (Van Horn) win his first national championship.”

Arkansas downed Nebraska 5-1 on Saturday, but the Huskers beat the Razorbacks 5-3 on Sunday to force the winner-take-all game Monday.

Arkansas' winning rally started with three consecutive two-out walks in the eighth, a run-scoring wild pitch to take the lead and then Charlie Welch’s three-run homer.

Kevin Kopps closed the game with the final of his seven scoreless innings.

Van Horn praised Bolt and his squad. He was amazed Nebraska was sent to Arkansas in the first place.

"When I saw them pop up, I thought, “Why are they sending the Big Ten champion here?’ It doesn’t make any sense when you look around,” Van Horn said. “You see some other regionals where a Power 5 is the No. 1 and they don’t have another Power 5 team in the regional, and they might have been a seven or eight seed, nine — whatever.

“I know it’s a really tough job and I get that, but Nebraska is a really good team. They kind of played a regional format for most of the season. They’ve gone on the road, stayed in hotels, played two games in a day, played two different teams, and I think that they came in here and they were a little comfortable — more comfortable than I wanted them to be.

Bolt agreed his team was comfortable and confident.

"I would say so, especially after going through a season like this — a season like no other where we haven't played a road game with more than just a handful of fans all year long," Bolt said. "We went toe to toe with one of the best in their ballpark.

“There are not many environments that are going to be tougher to play in than this one. I would say just the heart of this team, what they've shown all year long is they're not going to get rattled by much. I'm awfully proud of them."

Bolt raved about the Razorbacks' program.

”You can see what the best looks like when you come here,” Bolt said. “One of the best ballparks in the country. Unbelievable game-day atmosphere, just the way they support this team and obviously how talented Arkansas is. There's a reason they won every series in the SEC this year. SEC champs, SEC Tournament champs, we've seen what the best looks like."

“Arkansas is one of the best teams, well, I guess they are the best team in the nation right now and there is a reason for that,” Nebraska starter Cade Povich said. “Anybody can get hot throughout their line up at any moment."

Home runs by Casey Opitz in the fifth and Robert Moore tied the game and swung momentum to the home team’s dugout.

Povitz relished playing in front of the large crowd.

“It is the only place we have played at this year that had more than maybe 200 to 300 people," he said. "So we kind of embraced it and with all the stuff that was going on. We just kind of took it on. We decided we were just going to be that team that decided to make that upset happen. It is just unfortunate that it didn’t happen.

“The fact that we went from not even being in the top six in the Big Ten and being counted out by just about everybody to making our way through the losers’ bracket and beating Arkansas and making this Game 7 happen tonight, it’s been an honor to play with these guys."