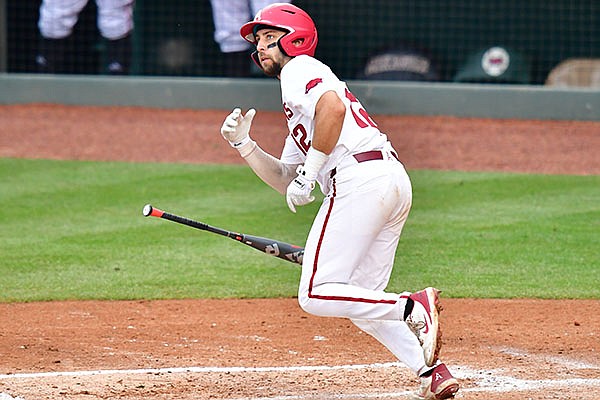 Arkansas catcher Casey Opitz hits a home run during an NCAA regional game against Nebraska on Monday, June 7, 2021, in Fayetteville.

FAYETTEVILLE — Casey Opitz’s first home run in more than two months was the University of Arkansas’ 100th of the season and it got the No. 1 Razorbacks off the deck and pointed toward a 6-2 win in Monday’s regional championship game against Nebraska.

Opitz homered off starter Cade Povich to lead off the fifth inning and cut Arkansas’ deficit to 2-1 after the Hogs had accumulated one hit and one walk through four innings.

“Casey has one home run going into the game, and we’ve seen Casey hit a bunch of balls out of here,” Arkansas Coach Dave Van Horn said. “But I haven’t seen him go down and hit a line drive right handed that hard.

“He went down and smoked that ball into the green seats over the bullpen on the line. It lit our dugout up, because all of a sudden we’re only down one run. In our dugout it was like, ‘What’s new? We’re always down one run. We’re in normal territory.’ We felt like the momentum switched over to our dugout a little bit.”

The Razorbacks would get two more homers, Robert Moore’s game-tying shot in the sixth inning and pinch hitter Charlie Welch’s three-run shot in the eighth to blow the game open and set the final score.

Arkansas will enter this weekend’s home super regional against North Carolina State with 102 home runs, led by Moore’s 14. The quartet of Christian Franklin, Brady Slavens, Matt Goodheart and Cayden Wallace have 13 homers each.

Optiz’s last homer, his first of the season, came on March 20 in a 9-1 win over Alabama.

Arkansas Coach Dave Van Horn said he wanted to put the guys in the lineup for Monday’s finale who had been the solid contributors down the stretch, which gave pinch-hitter extraordinaire Charlie Welch a chance to come off the bench.

Welch provided the game’s biggest hit, a three-run homer off left-hander Jake Bunz on his first offering after a wild pitch with the bases loaded allowed the go-ahead run to score.

“I’ve been kind of just trying to figure out the lineup,” Van Horn said. “You put your hitters in there. I had Charlie in there yesterday. It didn’t go real well. [Brady] Slavens is not hitting right now. [Christian] Franklin wasn’t seeing it real good. And that’s the middle of our order.

“I just told the coaches this morning that I was going with the guys that helped us win some big games, as far as the lineup. I brought up the Tennessee game with Gregory hitting in the nine hole, he got the big hit at Tennessee.

“It was hard for me not to put Charlie in there against that left-handed pitching. I just felt like we were going to get a shot later in the game if we keep it close.”

For the first time in the Razorbacks’ four games in the regional there was not a first-inning home run. However, Nebraska’s Luke Roskam hit a titanic shot over the right-field fence to lead off the second inning.

Arkansas fans delivered scattered boos for Roskam as he made an impressive bat flip and took his time circling the bases. A player in the Nebraska bullpen threw a glove more than two stories high in an effort to make contact with the ball just before it hit off Hunt Baseball Development Center.

Arkansas starter Jaxon Wiggins worked a three-up, three-down inning in the first on a strikeout, a line out and a ground ball, duplicating a feat Razorback pitchers accomplished just once in their 5-3 loss to the Cornhuskers on Sunday.

Arkansas Coach Dave Van Horn improved to 13-3 this season against his former players or assistants, including 2-1 against Nebraska Coach Will Bolt, who played for him with the Cornhuskers.

Larry Shank, the long-time UA baseball public address announcer who passed away in 2007, was featured during the pre game, shown on the video board singing the national anthem in an archived recording.

Shank spent 18 seasons as the voice of Razorback baseball from 1989-2008 and created the phrase, “This is baseball” still in use today. He has a commemorative case in his honor in the press box at Baum-Walker Stadium.