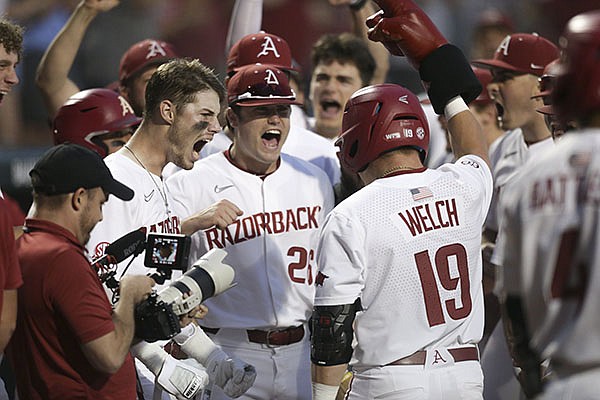 Arkansas pinch hitter Charlie Welch (19) is congratulated by teammates after he hit a home run during the ninth inning of an NCAA regional game against Nebraska on Monday, June 7, 2021, in Fayetteville.

FAYETTEVILLE — It looked like the Arkansas Razorbacks and Nebraska Cornhuskers would go into the ninth inning tied in their NCAA regional championship game.

The Razorbacks had two outs and no runners on base.

University of Arkansas center fielder Christian Franklin — who was 0 for 9 against the Cornhuskers in three regional games with eight strikeouts — was down 1-2 to reliever Koty Frank.

Then Franklin fouled off four pitches and worked a walk.

“That got it going,” Razorbacks Coach Dave Van Horn said.

6 things to know about NC State

By the time the inning was over, Arkansas had scored four runs and with SEC pitcher of the year Kevin Kopps on the mound the Razorbacks were in total control.

The eighth-inning rally and a career-long seven innings from Kopps carried the No. 1 Razorbacks to a 6-2 victory.

Welch, who is 8 of 12 as a pinch hitter this season, pulled a 2-0 pitch from Jake Bunz over the left-field fence after his wild pitch allowed Franklin to score from third base.

“I think Charlie knew that [Bunz] just threw a wild pitch and he was probably going to get him a fastball, and he got it right down central, and he hit it just as hard as you can hit it,” Van Horn said. “That’s the loudest I’ve ever heard this stadium, and I’ve been in some crazy games here. But that was incredibly loud.”

“I mean, you could feel it on your body,” Welch said. “It’s so loud, you’re shaking, your helmet is trembling. I’ve never experienced that.”

Welch said he thought that on 2-0 Van Horn would give him the take sign.

“I thought since they had thrown 11 balls in a row that Coach Van Horn was going to give me the take sign. ” Welch said. “So I looked at him and he gave me the green light and I got what I was looking for — a fastball down the middle. I hit pretty well.”

Franklin had a 10-pitch at-bat in the eighth inning.

“Franklin had a tough series against us and that was a big at-bat there just to keep extending it and spoiling pitches and took a couple close ones,” Nebraska Coach Will Bolt said. “Probably took a lot out of Koty there.”

After Frank followed the Franklin walk by walking Robert Moore on four pitches and went to a 2-0 count against Casey Opitz, he was replaced by Bunz.

“That Franklin at-bat was the difference and the tide-turner,” Bolt said

Kopps (12-0), who got Brice Matthews on a flyout to end the game, said it was nice to have a four-run cushion going into the ninth inning.

”That was huge,” said Kopps, who threw 185 pitches in three games and was voted the regional MVP by the media. “It’s relieving to score runs.

“Then when Charlie just blasted that ball into the seats, it really took all the momentum into our dugout and helped me settle down more.”

Nebraska got the early momentum when Luke Roskam led off the second inning with a home run off Arkansas starter Jaxon Wiggins over the right-field fence on a 3-1 pitch to put the Cornhuskers ahead 1-0.

Kopps came into the game with no outs in the top of the third inning and runners on first and second base after Wiggins walked Mojo Hagge and Logan Foster.

After Joe Acker advanced the runners with a sacrifice bunt, Hagge scored on a groundout by Jaxon Hallmark to give Nebraska a 2-0 lead.

The Cornhuskers would have scored at least another run if Franklin hadn’t made a diving catch of a drive by Spencer Schwellenbach.

Moore hit a two-out home run over the right-field fence off Cam Wynne in the bottom sixth inning to tie the game 2-2.

Moore’s 14th home run of the season gave him the team lead.

Opitz led off the bottom of the fifth inning with a home run — his second of the season — against Nebraska starter Cade Povich to pull the Razorbacks within 2-1.

“Arkansas is the best team in the nation right now, and there’s a reason for that,” Povich said. “Anybody can get hot throughout their lineup at any moment.

“I just left one over the plate and [Opitz] got a piece of it.”

Opitz’s home run got the crowd back into the game and energized the Razorbacks.

“He went down and smoked that ball into the green seats over the bullpen on the line,” Van Horn said. “It lit our dugout up, because all of a sudden we’re only down one run.

“We were just trying to stay calm because we felt like we were one big inning away.

“I just felt like that the guys’ energy level went up and I think Nebraska probably thought, ‘Wow, this is going to be tough to hold this. We’ve got to score. They’ve got Kevin Kopps on the mound,’ and maybe they started pressing a little bit.”

The big inning Van Horn and the Razorbacks finally came in the eighth.

“We were waiting for it all game,” Kopps said. “We knew it was coming.”

Van Horn said the plan after Arkansas took the lead in the eighth inning was to bring in Patrick Wicklander — who pitched five innings in the Razorbacks’ 5-1 victory over the Cornhuskers on Saturday night — for the ninth.

But Kopps, who has gone 3.0 or more innings in 17 games, insisted on finishing.

“I just felt good, excited about the game,” Kopps said. “They trust me and I was just ready to go.”