What to expect from Wichita State transfer Trey Wade 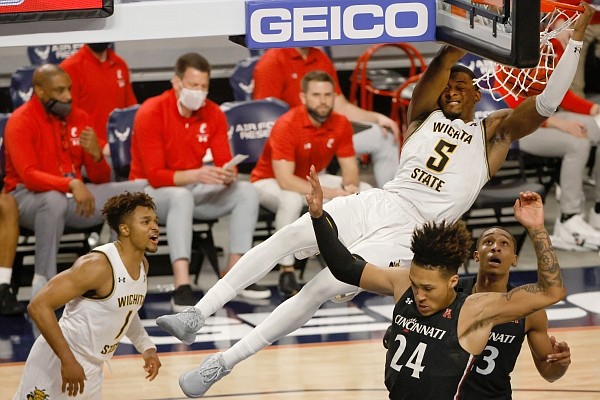 Wichita State forward Trey Wade (5) dunks over Cincinnati's Jeremiah Davenport (24) and Mika Adams-Woods (23) during the first half of a game in the semifinal round of the American Athletic Conference men's tournament on Saturday, March 13, 2021, in Fort Worth, Texas. (AP Photo/Ron Jenkins)

Former Wichita State forward Trey Wade announced he committed to the Razorbacks, making him the fifth transfer to pledge to Arkansas since the program’s run to the Elite Eight of the NCAA Tournament in March.

Wade, who stands 6-6, 221 pounds, has been characterized as an energetic and team-first player who was a plus on the glass over two seasons with the Shockers and one season at Texas-El Paso. He ranked ninth in the American Athletic Conference in offensive rebounds last season with 42, and 10th in the league in offensive rebound percentage (9.0) during the 2019-20 season.

“While his outside shooting was never as consistent as he would have liked, Wade always brought a high level of defense and rebounding that made him a valuable contributor to WSU’s success the past two seasons,” Taylor Eldridge of The Wichita Eagle wrote March 30.

A native of Marietta, Ga., Wade has put together impressive performances on the glass against quality competition. On Jan. 2, he finished with 9 points and 10 rebounds — 8 on the defensive end — in 31 minutes during an 83-79 Wichita State victory at Ole Miss.

And in a home win over Oklahoma in December 2019, Wade recorded an 11-point, 15-rebound performance that included 5 offensive rebounds. He also had nine boards in a loss at Memphis in the Shockers’ next-to-last game of the 2019-20 season.

“He just has a motor and it really never stops,” teammate Dexter Dennis said in 2019, according to The Wichita Eagle. “In practice he literally does the same thing. If the ball is in his area, I always think he’s going to get it. That’s just a T-Wade rebound. That’s what I call it.”

The transition from a mid-major conference can be challenging for some players, but Wade has already proven he can hang when playing Power 5 competition.

In four career games against Big 12 schools Oklahoma, Oklahoma State and West Virginia, he has averaged 7.8 points and 7.8 rebounds, including 3 offensive rebounds, and nearly 1 block and 1 steal. And in five games against SEC teams Ole Miss, Missouri and South Carolina, he has put up 7.2 points on 46.7% shooting, 5.2 rebounds and 2.2 assists.

In his second meeting with South Carolina in 2019, Wade totaled 11 points, 6 rebounds and 4 assists, and he added a then-career-high 5 assists on the road against Ole Miss last season.

Wade appears to be a fairly skilled passing big. He was third on the team in assists last season with 34, and fifth the season before despite finishing with a career-high 41. Wade led Wichita State forwards in that category both seasons.

Wade is also a low-turnover player. Only three times in his 78-game career has he recorded more than two turnovers in a game.

According to KenPom data, Wade has finished in the top 12 in his conference in turnover rate each season, including fifth in 2019-20 and seventh in 2020-21. In AAC play the last two seasons, which spanned 31 games, he totaled 37 assists against 22 turnovers.

Given his 7.1 point-per-game career average, Wade is not a big-time scorer, but he is capable of dropping a 20-point performance when finding the range from three. He scored a career-best 23 points against Tulane last season, knocking down 4 of 5 attempts from deep.

“Trey puts in the work, man,” Shockers coach Isaac Brown said after the Tulane game. “Even when he wasn’t shooting the ball well, every day after practice he would stay to get up 200-300 jumpers, so I’m just so happy for him. He put in the work and he was able to go out there and make some shots.”

During the 2019-20 season, Wade posted a PAM — points above median, a calculation of how many additional points a player scores when compared with what an average player would have scored with those field goal attempts — of 10 at the rim in transition, which was third best on the Wichita State roster, according to HoopLens analytics. His PAM at the rim in non-transition and non-offensive rebound situations was 17.4, which ranked second on the team.

Last season, those numbers dipped to 4.3 and 2.7, respectively. But at UTEP as a freshman, his non-transition, non-offensive rebound PAM at the rim was 14.9.

“He can move his feet, he can get down in a stance, he’s long, he’s been coached before,” Marshall said. “Trey can do just about anything on a basketball court. He’s a good basketball player. He brings very few limitations. There’s nothing where you go, ‘Man, you really can’t do that at all.’