HR ball finds its way back to Welch 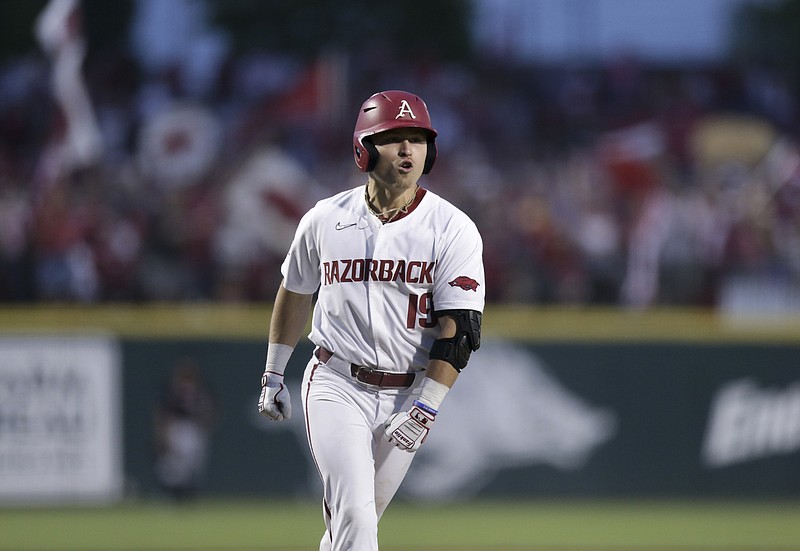 Jacob Sprout is a smart husband. After diving on the concrete to grab one of the greatest home run balls in Arkansas baseball history, it was immediately presented to his wife.

“He dove between two people,” Jaylin Sprout said. “He passed it off to me. It’s mine.”

It won’t be hers for long. She will give it to Charlie Welch, the now legendary pinch-hit star for the Razorbacks who socked it into the seats.

Welch hit a three-run homer beyond the Arkansas bullpen in the eighth inning to seal a 6-2 victory over Nebraska for the championship of the NCAA Fayetteville Regional.

Jaylin reached out to Welch. In trade for the home run baseball, she will receive a bat autographed by Dave Van Horn, balls autographed by the team and tickets to the Friday game to make the swap.

The Nebraska game was the first game for the Sprouts at Baum-Walker Stadium, although Jaylin went to the College World Series with her grandfather in 2012.

“My hometown is Hope and Bo Bigham is from nearby (in Texarkana), and we considered him to be a hometown boy, so we went,” Jaylin said.

That was a cool experience, but the weekend watching the Hogs win their latest regional tops everything. They were in the Hog Pen area for a wonderful weekend.

“I’ve never had a (souvenir ball), but my husband caught a foul ball on opening day for the Travelers,” Jaylin said. “But this one, wow.”

There was a real chance at two home run balls. The Casey Opitz homer earlier in the game landed a few seats away.

“It was weird because the one (Welch hit) was coming right at us,” she said. “We thought, ‘Here comes another one.’ It hit someone a few seats away and it bounced off a few hands and was right under us.”

There were three home runs by the Hogs during the game. Robert Moore also blasted one to right field. Most say the crowd noise was deafening for all three.

“I’m not sure how loud it was on Charlie’s home run,” Jaylin said. “We were screaming too loud to know how loud everyone else was screaming.” 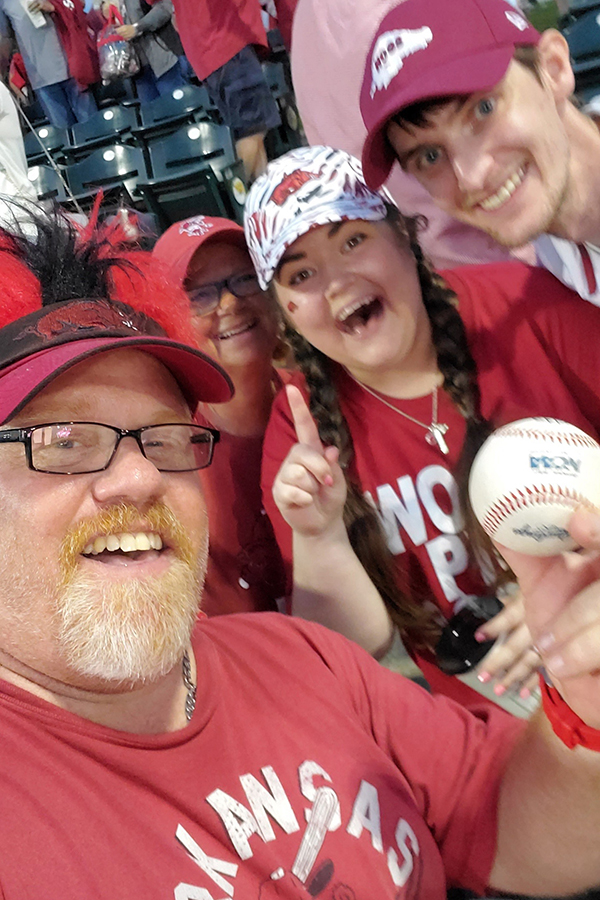 Rick Bawiec, sitting two seats from the Sprouts, helped set up a media interview and greased the path to get the ball to Welch.

“I knew they wanted to do something like that,” Bawiec said. “What a neat couple. That’s a historic ball, but they wanted Charlie to have it.

“Man, what a weekend. I saw the ball laying there for an instant. I don’t know why I didn’t jump on it. I was just jumping up and down cheering.”

It turns out something similar happened following another big hit by Welch. The ball from the pinch-hit game winner against Florida to clinch the SEC regular-season championship on May 21 also made it to Welch.

Bawiec is the fan who was sitting behind home plate and seen on TV waving his shirt after the Welch walk-off hit against Florida.

For the superstitious among baseball fans, Bawiec blames himself for the Hogs needing a seventh game in the regional. He said a broken pair of sunglasses ruined Sunday’s game.

“I have some special bases loaded beer glasses,” Bawiec said. “They were on the couch and I sat on them just before we were to head out the door Sunday.

“I tried to super glue them together and finally realized it wasn’t going to work. I was miserable the entire game. You have to have your lucky sunglasses when the bases are loaded. I was pretty mad at myself.”

So there was work to do Monday.

“I got duct tape and super glue and got them back together,” he said. “I look like the Wild Thing with them on, with all of that tape. But they worked when we got the bases loaded. We got that wild pitch for a run and Charlie’s homer.”

The Sprouts — and maybe Welch, too — can thank Bawiec for getting the karma correct.