John McDonnell made a worldwide impact 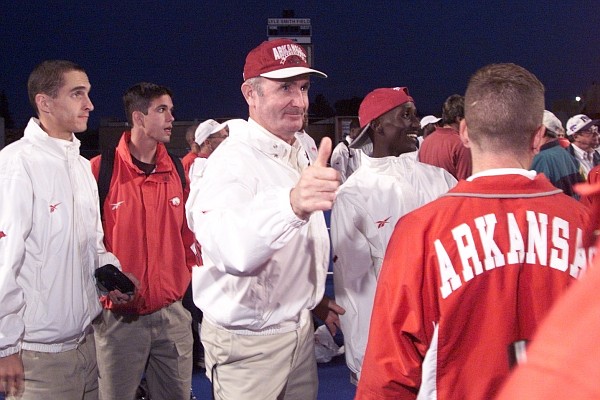 FAYETTEVILLE — When Lance Harter, coach of the University of Arkansas women’s cross country and track and field teams, has been abroad, he’s often reminded of home thanks to John McDonnell.

That’s the kind of worldwide recognition McDonnell gave Arkansas, Harter said, because of his accomplishments as the Razorbacks’ men’s cross country and track and field coach.

“For the entire state of Arkansas, he gave world credibility that track and field is something you better be proud of, because Arkansas was synonymous with winning,” Harter said Tuesday when he reflected on McDonnell’s life. “I’ve been fortunate enough to be on a lot of international teams, and we could be somewhere across the world and people would find out I’m from Arkansas, and they’d say, ‘Oh, do you know John McDonnell?’

“John was an international celebrity when it came to our sport.”

McDonnell, who led Arkansas to 40 national championships before retiring in 2008, died late Monday night. He was 82.

“A runner of ours a few years ago, Dorian Ulrey, was at a Grand Prix meet in Rome,” Chris Bucknam, who replaced McDonnell as Arkansas’ men’s coach, said Tuesday. “Dorian had his Arkansas uniform on, and from the stands he said he could people going, ‘Woo, pig, sooie!’

“John wanted great athletes, and not only did they come from the United States, but from all over the world.”

McDonnell, who became a U.S. citizen in 1969, recruited his native Ireland for many top distance runners but also had athletes from other countries in a variety of events.

“It’s amazing the number of his former athletes that live in the area right now,” Bucknam said. “Those athletes come to our practices and come to the meets, and the new kids meet them.

“Whether it’s Joseph Bolt or James Karanu, Mike Powers or Godfrey Siamusiye, David Swain, Gary Taylor, Frank O’Mara — I could go on and on — that made their home here.

“New kids coming in say, ‘This place must be pretty special if these guys came and stayed.’ That’s a tremendous compliment to Northwest Arkansas and Fayetteville and the surrounding area, of what a wonderful place this is to live.”

Harter said McDonnell was able to blend athletes from different countries into a close-knit team.

“One of the things I picked up on, it didn’t matter what country you were from, what your background was, when you arrived in Fayetteville, you were a Razorback,” Harter said. “He just instilled that culture to be prideful that you’re wearing the Arkansas jersey and that you’re honored to be selected to do that.”

Bucknam and Harter visited McDonnell in hospice care on Sunday when several of the former Razorbacks he coached also were there.

“Guys made a special point that it wasn’t just about winning championships, but the lessons that he taught them that have carried beyond track and field,” Bucknam said. “The success and the grit and the type of people that came out of that men’s program shines bright today because of Coach.

“And boy, did it ring true when you listen to these athletes pay tribute like I did on Sunday to Coach. That really hit home to me.”

Bucknam said it was challenging to replace a legend, but that McDonnell offered strong support.

“He was wonderful,” Bucknam said. “He always had a positive vibe.”

Harter came to Arkansas in 1990 from Cal Poly-San Luis Obispo in part because McDonnell convinced him the women’s program could become an SEC and national power like the men’s program.

“John was one of the first people I met when I came on the visit to look at the job,” Harter said. “I said, ‘John, you’ve had unparalleled success. Do you think that can happen on the women’s side?’

“He said, ‘No doubt about it. But you need to get some bellcows up front.’ What impacted me most is how he created a culture on his men’s team that all he had to do was give you a look to see what the expectation was.

After McDonnell retired as men’s cross country and track and field coach at the 2008 outdoor season, his peers in the U.S. coaches association created the “John McDonnell Program of the Year Award.”

The award is presented annually to the men’s program with the highest combined finishes in cross country and indoor and outdoor track.

“The thing that made an impression on me — and the award’s named after him — he tried to win everything,” said Bucknam, whose Razorbacks won the McDonnell Award for the 2012-13 and 2016-17 school years. “And he did win everything.

“It speaks to the type of coach he was, that he was there for everybody in every season. He always felt like every season had a meaning.

“Cross country works towards indoors and indoors works towards outdoors, and without all three of them, you never reach your potential.”

McDonnell’s specialty was coaching distance runners, but as the program continually improved the Razorbacks developed quality depth in many events.

“So whatever formula was going to be most successful for Arkansas, he would adapt to, and then he would fill whatever strengths the team had with a distance crew to complement it.

“That’s a formula that I think both Bucky and I have adapted to, is that we’re not going to just be specialists in one sport or the other. We’re going to try to reach across and have great cross country and great indoor and outdoor track and field.

McDonnell coached the Razorbacks to 84 Southwest Conference and SEC titles during his his 36-year tenure from 1972-2008.

“John told me, ‘Win the SEC meet. That comes first. That’s the meet you’ve got to win. Everything else will come together for you,’ ” Bucknam said. “He was very much a team guy. He wanted as many athletes involved as possible winning championships, and I think that’s one reason why he loved the SEC meet and the Southwest Conference meet.”

Harter said he always enjoyed his lunchtime runs and walks with McDonnell and how much he learned from their talks.

“John was always a great mentor, and I was always the benefactor from our talks,” Harter said. “He will be greatly missed.”

Bucknam and Harter said they both were impressed with how McDonnell balanced coaching with the support of his wife, Ellen, and children, Heather and Sean.

“I just look at how successful a husband and dad he’s been along with all the [coaching] success — unprecedented success off the charts,” Bucknam said. “That’s hard to do when you have a family.

“That’s one of the things that really stuck out to me, is the love coming from Ellen and Heather and Sean and the family. They shared him with us an awful lot.”