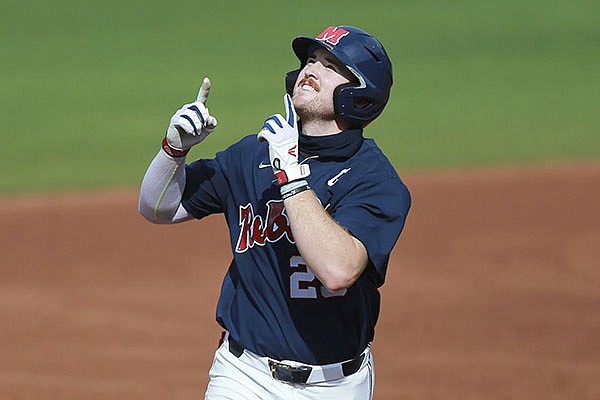 In fact, it has scarcely slowed him down — at the plate, at least.

The Rebels' team captain is coming off a huge regional — three home runs, including a pair of grand slams — to help Ole Miss advance to the super regional at Arizona starting Friday.

Elko has been playing for more than a month on a torn right ACL sustained in a game against North Alabama on April 5. On what started as an apparently routine groundout, his knee buckled while Elko tried to dodge the first baseman after an errant throw.

“The risks weren't high enough for me not to want to give it a go,” Elko, who plans to have surgery shortly after the season ends, said Thursday in a phone interview. “That’s why I have and I’m really happy that I did.”

He has continued to deliver big hits in the postseason.

Rebels coach Mike Bianco raves over his team captain’s feats since the injury.

“Holy cow. It’s legendary,” Bianco said. “What seemed like maybe one of the biggest tragedies of not just our season but somebody’s career here, getting hurt in early April, has turned into one of the biggest legends that we’ll all be talking about for decades.

Elko, who wears a knee brace, had 10 RBIs in four games at the Oxford regional to earn MVP honors.

Having played first and third base before the injury, he serves as the Rebels' designated hitter and typically is lifted for a pinch-runner after getting on base.

Video of his grand slam over the right field fence against Southeast Missouri State was approaching 700,000 views on Twitter.

Half of his 14 post-injury hits have been homers, with no other extra base hits. Home run trots are a lot easier to manage.

“Obviously being able to jog around the bases is a lot easier and a lot better,” Elko said, laughing. “I do enjoy that”

Bianco said it's the first time he has had to deal with a torn ACL in one of his players, and he didn't know at first there was a chance Elko could play again this season.

But Elko got the same answer in a second opinion from Dr. James Andrews. So he started hitting off a tee and eventually played in a simulated game against live pitching.

“He looked like the regular Tim Elko,” Bianco said.

He still does at the plate. Elko said swinging the bat feels normal, unless he has to make a sudden movement to get away from a pitch or something.

Southern Miss coach Scott Berry, whose team lost to Ole Miss and Elko in the regional finals, called him “a big-moment player." Elko hit two homers in that game, including a second slam.

“He’s Kirk Gibson every day he gets in the game,” Berry said after that game Monday. "He’s a special player. I know he’s a big team captain and he’s what makes their team go.

The SEC's scholar-athlete of the year, Elko also homered twice and drove in all four runs in a 5-4 loss to Vanderbilt in the Southeastern Conference Tournament.

“I think every time he’s hit a bomb since (the injury) I just can’t help but give him a hug and just embrace him,” Broadway said. “It’s something I’ve never seen before and it couldn’t happen to a better dude. I’m just so thankful he’s on our team and our captain. He just does everything the right way and I just look up to him.”

And with plenty of help from Elko, the Rebels are still playing.

“"Obviously we don't get through the regional without him and without his production," Bianco said.