McDonnell was unequaled in track and field 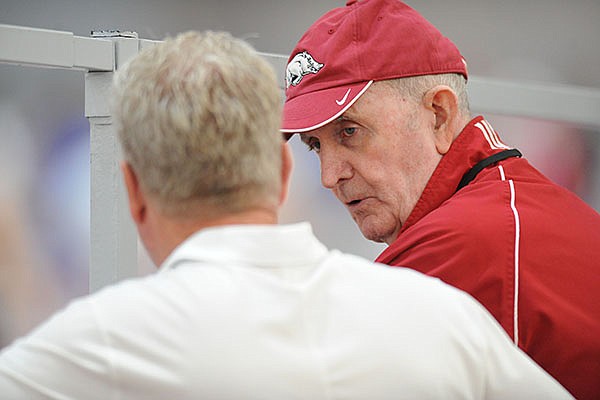 From coast to coast, these Razorbacks were feared.

The John McDonnell-coached University of Arkansas track and field teams were almost unbeatable from the time he became the head coach in 1978 until he retired.

How does one coach go about winning 40 national championships and 20 triple crowns in any sport?

For one thing, McDonnell loved his athletes professionally and personally.

He cared about them when they competed for him and for as long as they lived. And they knew it.

Once, when Danny Ford was the Arkansas head football coach and all the athletes used the weight room in the Broyles Complex, Ford thought the track team was walking on his football field as they made their way to workouts.

Ford found the gate they used, wrapped heavy gauge chain around it and padlocked it.

He thought they could use the sidewalk.

The next morning McDonnell backed his pick-up to the gate, cut the lock, threw the chain in the bed of his truck and drove to the front of the complex where he walked in and told Ford that he was welcome to chain the fence again because he could always use more chain on his farm in Pryor, Okla.

Ford got the picture. It was the same thing he would have done, so they started talking cattle, which they both raised and a lasting friendship was forged.

McDonnell started his life in County Mayo, Ireland, and it ended as an unequaled legend in track and field from coast to coast of the United States.

After a year’s hiatus because of the coronavirus, the Little Rock Touchdown Club will be back this fall.

Founder David Bazzel is promising it will be the best in the 17-year history as far as speakers go, but as usual, he’s not releasing any names.

However, he is urging everyone in Arkansas to join the National Football Foundation. It’s $40 and can be done securely on line at www.footballfoundation.org.

There are two very good reasons Bazzel is reaching out: Dan Hampton and Brandon Burlsworth.

Both have been nominated but never receive enough votes.

Every member gets a vote.

It is hard to believe after all these years that Hampton, who was one of the greatest defensive linemen in college football history, hasn’t made it.

Burlsworth, too. He is one of the great college success stories going from walk-on to All American.

Those wanting to get a jump on joining the Touchdown Club can do so at www.lrtouchdown.com.

More news to come on who the speakers will be and the dates, but this is just another sign that the world of perspiring arts is returning to normalcy.

While on the subject of voting, an emailer yesterday asked that the email address for the Golden Spikes Award be posted to give Arkansas Razorback pitcher Kevin Kopps a chance to win the award.

Apparently voters can vote up to 25 times per day at www.usabaseball.com/golden-spikes-award/nominees/2021.

Kopps, who has a 12-0 record and 11 saves, was voted the Collegiate Baseball national player of the year.