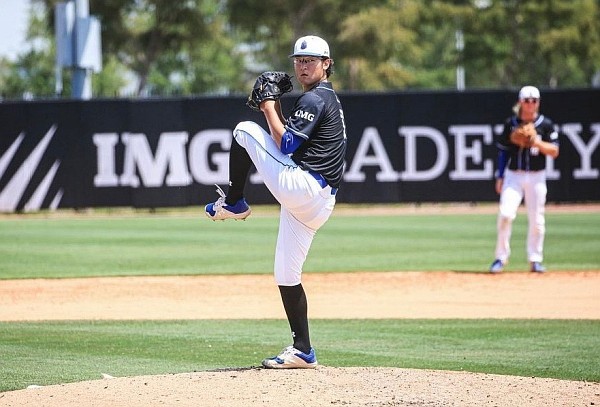 Arkansas will have at least one fan in Seoul, South Korea, rooting for the No. 1 Razorbacks this weekend in their Super Regional against North Carolina State.

“I’m in Korea right now,” Cho texted. “(I) have quarantine until this Friday and I’ll be home all summer.”

He visited Arkansas on the weekend of May 7-9 and chose Arkansas over Vanderbilt, Ole Miss, Georgia Tech and others.

“I watched the game against Georgia and it was the first time that I watched a college game in person,” Cho texted. “I love their facilities and program especially pitching wise.

“I feel like they know how to compete and know how to win the game. It was really fun to watch their season this year.”

Cho hopes to get back to Arkansas next season.

“I would love to visit again,” Cho texted. “It was one of the best experiences that I have ever had.”

Another big factor in choosing Arkansas was because of Heston Tole, a former IMG player and current Razorback freshman pitcher.

“He is the nicest person I know,” Cho said. “He told me a lot of details and information about Arkansas. It was a really good year for him as a freshman.”

“I got to face him and he is just gross,” Varnado said as a compliment. “He throws like eight different pitches, like gyros and all that kind of stuff so he is really good.

“He is a 2023 guy and was on our second national team. He will be the number one or two guy for the national team next year. He is a great young pitcher and is just going to keep getting better and will make us a great pitcher once he gets to Arkansas.”

“I have four seam fastball, curve ball, slider, and change-up,” Cho texted. “I am trying to gain some weight so the (IMG) nutrition and training coach gave me a lot of information.”

Cho, one of 13 Arkansas 2023 pledges in a class that is ranked eighth nationally by Perfect Game, is a big fan of Varnado and Gray.

“Drake is one of the best shortstops in high school,” Cho texted. “He was the lead off guy for this season and knows how to play baseball. He also brought a lot of energy for out team.

“And Drew has very special arm. He already topped at 97 (miles per hour fastball) this year which is ridiculous.”

Cho’s path from Seuol to IMG started with a trip made there by his dad.

“My dad is a college baseball coach in Korea,” Cho noted. “He went to IMG for spring training in 2018 with his team and he wanted me to come here. I’ve got there when I was in the seventh so have been there for four years.”