Welch a folk hero after years of hard work 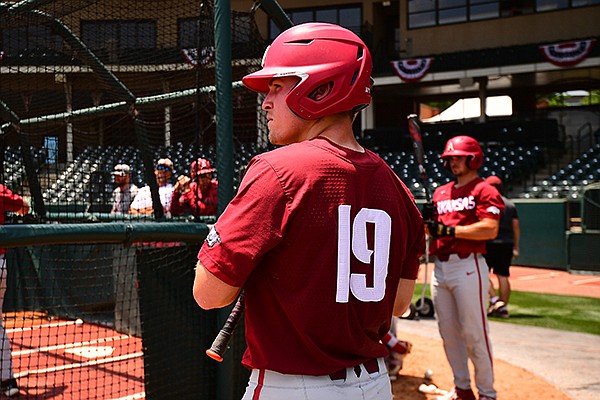 As the legend of Charlie Welch grows, Ron Slusher’s smile continues to get bigger.

The legendary coach of the Ohio Warhawks in Springfield, Ohio, could have told Razorback Nation what to expect from one of his many star pupils. Slusher said Welch was the perfect fit for Dave Van Horn's program.

“I have known for a long time that Charlie Welch was going to be something special,” Slusher said. “We had him in our Warhawks program for three summers in high school. He was our hardest worker. You just knew how this was going to turn out.

“The thing I remember, he was the first on the field and last off. You have heard that old coaching cliché of a self-made player? That’s Charlie.

“Now Charlie has talent, but he’s living proof that if you put in the work, you get good results.”

The results have been off the charts for Welch this season. Used as a pinch hitter in key situations, Welch leads the Hogs with a .375 average. He has six homers and 18 RBI. He’s started 12 games, but is 8 for 12 as a pinch hitter.

Welch came off the bench with a three-run homer in the eighth inning to help Arkansas beat Nebraska 6-2 in the clinching game of the NCAA Fayetteville Regional on Monday night. He had the game-winning hit — also as a pinch hitter — against Florida as the Hogs clinched the SEC regular season title May 21.

The Warhawks are one of the old-time summer league programs. Slusher formed the team 31 years ago. They have won 14 national titles with 13 runner-up finishes.

Slusher refurbished a 114-year-old church with barracks to sleep 30 and dubbed it “The Nest.” There are top-shelf batting cages behind the back door. He doesn’t take money and the Warhawks play on the road.

“Ron takes care of their travel and their uniforms, everything,” said Tim Welch, Charlie’s dad. “That program teaches these players a lot about accountability. They all have chores. Ron made the biggest imprint in Charlie’s development.

“Charlie was 16 when we sent him to Ron, the summer after his sophomore year in high school. He played with the 19-and-under team.”

The Warhawks are one of two famous summer travel teams from the same area. The other, the Midland Redskins, produced former Arkansas star Andrew Benintendi.

“That’s our biggest rival,” Slusher said. “But we like to talk about our Razorbacks, too. We had Matt Goodheart here at the same time as Charlie.”

Slusher is excited to tune in as Welch and Goodheart shine in the national spotlight for the No. 1 Razorbacks.

“I’m watching. Oh, what fun it is, but I have known what kind of young men both are because we watch them grow into young men in The Nest. It’s our baseball house, but it’s got everything — six refrigerators, six freezers, PlayStation and everything else.

“But what makes The Nest special is those three hitting cages, like they have in MLB. Our boys just live in those cages.”

Welch was a stud for Slusher.

“He hit over .400 the entire time he was here, with wood bats,” Slusher said. “The thing that was tough about Charlie is that a lot of the top college coaches recruited him and misled him.

“It never bothered Charlie. Most would have fallen apart. He didn’t and that’s when I knew he would be something special. We had all of our (summer program) boys in The Nest on Monday night cheering for Charlie.”

Welch committed to South Carolina as a high school freshman. But his scholarship money was reduced in a coaching change during his senior season. Instead, Welch went to Pepperdine. He spent last season at a junior college.

It was about the same time as the issues at South Carolina hit that Welch transferred to Jefferson High School in Tampa, Fla. Like the Warhawks, Jefferson has a storied baseball path.

Among the alumni are Tony LaRussa, Louis Gonzalez, Fred McGriff and Tino Martinez. Pete Scaglione, a long-time figure at Jefferson, likes to count Welch among the greats to have played there at this point.

“Oh, are we having fun watching Charlie on TV these days,” said Scaglione, a well-known local attorney but sort of the de facto general manager and oftentimes assistant coach at Jefferson.

“I’ve been corresponding with Charlie all year. It looks like he’s sort of become a folk hero in Arkansas. None of what he’s done surprises me. He helped us to the state high school title in his season with us.”

That probably does not surprise that Jefferson would win state titles, but it has had more stars than trophies through the years.

“We had a bunch of major leaguers one year and we didn’t win it,” Scaglione said. “We’d been to the state finals one other time in 85 years until Charlie got here and we won in 2018.”

Scaglione gives a lot of credit to Welch.

“Charlie came here for his senior year and made an instant connection with our team,” Scaglione said. “We didn’t know him. It looks like he’s doing the same thing in the state of Arkansas.

“What he does is just out work everyone. I saw great work ethic from players like Fred McGriff and Tino Martinez, but we’d never seen anyone work like Charlie.

“What he gave us was leadership. We would have never won the 2018 title without him. He was that take-charge catcher that your pitchers love. I’ve coached here 24 years and never seen anything like it.

“I liked to joke with him that he worked so hard that he didn’t have time to find a girlfriend. He was such a pleasure to watch.

“By the time we got to the state tournament, he was handling the pitchers, calling everything. Our guys trusted him.

“Now that team had talent, but Charlie was having a coach on the field.”

Scaglione said the only problem was intensity.

“Yes, he had too much at times,” Scaglione said. “I had to calm him down sometimes. I think he’s learned to keep everything just right now. I saw that Monday night.”

Scaglione said he was watching.

“Oh, did he have a hell of a night or what?” Scaglione said.

Tim and Kelli Welch, Charlie’s parents, were watching on TV, too.

“Unfortunately, we were not there because we were in Cape Girardeau (Mo.) for a family funeral,” Tim Welch said. “When he hit that home run, Kelli and I fell down on the floor in tears. It was unbelievable. We were really shook up.”

He had to pause during the phone interview, in tears again just recalling the emotion.

Charlie Welch has an emotional story for sure. His dad recalls all of the turns and twists as he grew up in baseball.

“It’s been a tough path,” Tim Welch said. “I could tell you all the stories about who told Charlie he wasn’t big enough, fast enough or strong enough. You’d know some of them.

“First, Charlie is grounded by God. Second, there are a lot who have helped him. We are thankful for what the coaches at Arkansas have done for Charlie. (Hitting coach) Nate Thompson has helped a lot.”

“Sure did,” Tim Welch said. “Charlie went to a hitting (training center) in Tampa where Dante and his son Bo would work out. Dante would sit and talk with Charlie for hours on approach and mechanics. He’d work with Charlie 90 minutes at a time.”

“Maybe he does, but what I know is that more than anything else Charlie has God-given drive,” Tim Welch said. “That’s the only way I can explain it.

“Charlie played everything growing up. He played basketball, flag football and was a good golfer until the eighth or ninth grade. All the time, he’d find ways to work out and make himself better.

“I can recall seeing him do sit ups and push ups in our living room. That was at age 12. He had a pull-up bar in a doorway."

He just wanted to be good.

“That was after so many just told him he couldn’t do something. No one was ever mean to him, but the coaches just didn’t encourage him when he was young. It never slowed him down.

Slusher sees the changes, but it’s the same old Charlie Welch to him. He's a 6-foot, 205-pound bundle of energy and work ethic.

“What I see is that Charlie has developed every ounce of talent in his body,” Slusher said. “Now Arkansas gets to benefit.”