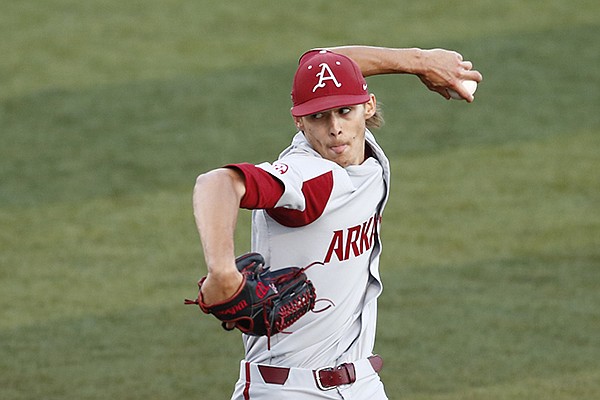 Arkansas pitcher Caden Monke throws during a game against Tennessee on Friday, May 14, 2021, in Knoxville, Tenn. (Photo courtesy Tennessee Athletics)

FAYETTEVILLE — Arkansas left-handed relief pitcher Caden Monke made one appearance and worked 1/3 of an inning in the NCAA Fayetteville Regional.

His lone outing came in the opener against NJIT when he allowed 2 earned runs and walked 2 batters in 15 pitches last Friday. It was his second consecutive appearance in which he recorded one out and the third in which he struggled with command.

The Razorbacks will likely need more from Monke against North Carolina State this weekend with a trip to the College World Series on the line.

“He's ready to go,” Arkansas coach Dave Van Horn said Thursday. “He didn't really have to throw last weekend. He's well rested. You can just go off their bullpen, what Coach (Matt) Hobbs tells me. He said he's good to go and we're planning on using him.

“Hopefully he'll get on the mound and have a really good outing for us whenever we use him.”

In his last three appearances, Monke has issued 7 walks, including a season-high 3 against Ole Miss in the SEC Tournament semifinal, versus 2 strikeouts.

“I think it was something that just snowballed on him a little bit,” Hobbs said prior to the regional. “He’d miss a pitch here and that affects three pitches down the road because he’s still thinking about the pitch he missed. He’s always done a really good job of slowing the game down when things spiral a little bit on him, and for some reason he just didn’t do it in those two outings.”

And given star reliever Kevin Kopps’ usage in the regional, Arkansas is hopeful Monke can return to form as one of its most trusted relievers, and soon. He is second on the team with 26 appearances, trailing only Kopps, and fourth with five wins.

"Monke's been great for us all season,” catcher Casey Opitz said. “He's kind of found his role, that middle-relief guy to come in and face some lefties or some righties when the matchups look good.”

Opitz said Monke has looked good in practices this week.

“Obviously, his last couple outings haven't been up to his expectations, so I'm even more excited because he's going to get out there and get back to doing what he does,” Opitz said. “He's been a big part of what we've had going to be able to come in and give guys different looks.

“Get those innings and set it up for Kevin or whoever we have coming in after that."