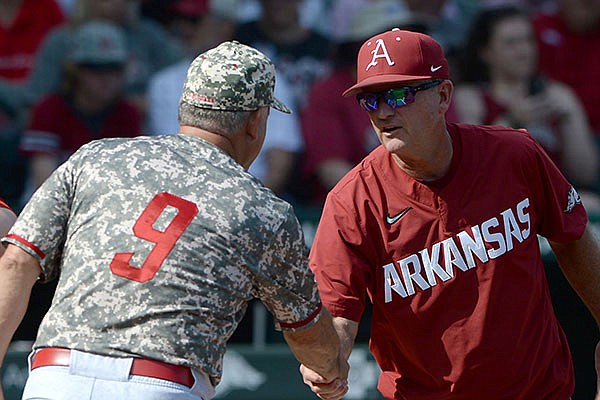 TELEVISION The game will be televised by ESPN2 and can be accessed via WatchESPN.com and the ESPN app (carrier login required).

FORECAST According to the National Weather Service, Saturday will be partly sunny with a high near 89 degrees in Fayetteville, and a heat index of 99 degrees. There is a 30% chance of showers and thunderstorms.

NOTABLE With a win Saturday, Arkansas will advance to the College World Series. NC State must win games Saturday and Sunday to avoid elimination….Arkansas advanced to the super regionals by going 3-1 in a home regional against NJIT and Nebraska….NC State won the Ruston (La.) Regional with a 3-0 record against Alabama and No. 16 overall seed Louisiana Tech….The Wolfpack went 19-14 in ACC play after a 1-8 start. NC State finished second in the ACC regular-season standings and was runner-up at the ACC Tournament....The super regional marks the first on-field meeting between North Carolina State coach Elliott Avent and Arkansas coach Dave Van Horn, who rank sixth and seventh, respectively, in wins among active college coaches….Van Horn is the active leader in College World Series appearances by a coach with eight. Van Horn has led Arkansas to the College World Series six times and took Nebraska twice….Avent coached NC State to the College World Series in 2013, which was the program's first appearance there in 45 years….Arkansas is looking to advance to its 11th College World Series and third straight. The Razorbacks went to Omaha in 2018 and 2019. No tournament was played last year….Arkansas relief pitcher Zebulon Vermillion will return to the 27-man roster this week. Vermillion was held out of the regional with arm soreness. Vermillion replaced Caleb Bolden on the roster. Bolden is nursing arm soreness….Arkansas first baseman Brady Slavens is about 80% of full health, Van Horn said. Slavens returned to action last Sunday after a sprained ankle forced him to miss five games….NC State designated hitter Terrell Tatum is the son of former Arkansas running back Terrance Tatum, who played for the Razorbacks from 1982-85. Terrell Tatum’s older brother, Terry, was a redshirt baseball player at Arkansas in 2013….Arkansas is the No. 1 overall seed in the NCAA Tournament. The Razorbacks are attempting to become the first top seed to win the national championship since Miami in 1999….Top overall seeds have advanced to the College World Series 14 times since 1999. Three lost in a home regional and three lost in a home super regional….Arkansas is 30-6 at Baum-Walker Stadium this season. The Razorbacks have a 138-27 record at home since the start of the 2017 season….NC State is 19-4 in road games this season, including two games at Louisiana Tech last week....Arkansas is hosting a super regional for the fifth time. The Razorbacks won home super regionals in 2004, 2015, 2018 and 2019....NC State lost road super regionals in 2003 at Miami, 2008 at Georgia and 2012 at Florida.