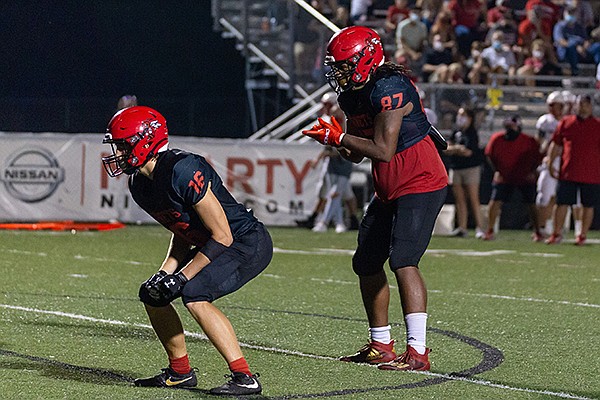 Maumelle's Nico Davillier (87) prepares to take a snap during a game against Vilonia on Friday, Sept. 11, 2020, in Maumelle. (Photo by Jonathan Chamblee/A Thousand Words Photography)

University of Arkansas defensive line target Nico Davillier has several of the Razorback commitments in his ear in an effort to persuade him to become a Hog as he nears his college decision set for June 27.

His teammate and Arkansas offensive line pledge Andrew Chamblee (6-5, 290) is telling Davillier that he and the other commitments can help the Razorbacks improve.

“I just tell him it’s home and the crew is going to make the program better,” Chamblee said.

Defensive lineman JJ Hollingsworth, 6-4, 257, of Greenland, was the Razorbacks’ first commitment in the 2022 class. Seven of the 10 commitments are in-state prospects.

“Me and Nico talk quite a bit. This week we spent over an hour and a half at least on the phone,” Hollingsworth said Sunday. “We don’t always talk about football, though. Most of the time it’s just small talk.

“I think him seeing all of the in-state guys staying home is helping his decision a lot. He’s been telling me about all the fan love he’s been getting from Arkansas and that plays a huge factor in someone’s decision. All of the in-state guys stay in his ear though, so we are all pretty confident in his decision, but at the end of the day we are all going to stay really close even if he doesn’t stay home.”

ESPN rates Davillier a 3-star prospect, the No. 38 defensive tackle in the nation and the No. 4 recruit in Arkansas. He had 39 tackles, 10 tackles for loss, 3 sacks and 1 forced fumble as a junior.

Clarendon tight end Dax Courtney, 6-6, 212, was the Razorbacks’ second pledge in the class. He estimates he and the other pledges talk to Davillier two to four times a week in group-chat sessions.

“We definitely stay on him,” Courtney said. “Mostly just talk about how cool it would be to all be up there together, talk about the fan base, just stuff like that. But about anytime he says anything in the group chat, he’s usually going to get something said to him about staying home.”

“We’re all constantly in his ear about Arkansas. He’s a great player and a huge pick up if we land him,” Henderson said. “I think Nico knows what we got here and what’s happening. I would respect his decision no matter what, but I would hope he can see how special this group is and how he can be a part of something bigger than him and bigger than football.

“This could be legendary times in the making, and we want as many people to be a part of that as possible, especially a home-grown guy like himself. He and us all can be remembered long after we’re gone from the Hill.”

Athlete Quincey McAdoo, 6-3, 180, of Clarendon, committed to Florida State on Jan. 10 before re-opening his recruitment and switching his pledge to the Razorbacks in April. He also visited Fayetteville last week with Davillier.

“I told him I’d be happy wherever he went because that’s my dog and not too many teenagers are doing what we are doing, but how crazy would it be if we played on the same team and changed Arkansas,” McAdoo said.