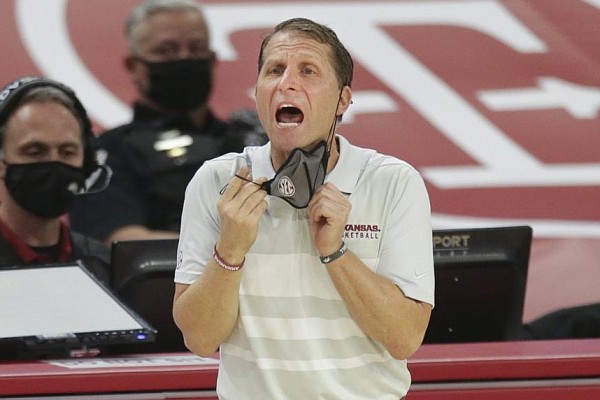 Arkansas head coach Eric Musselman reacts, Saturday, January 9, 2021 during the second half of a basketball game at Bud Walton Arena in Fayetteville.

Arkansas coach Eric Musselman and his staff didn’t waste time in reaching out to about 25 prospects in the 2023 class once the clock struck midnight in four different time zones.

June 15 is the first day college coaches can make direct contact with prospects in the 2023 class.

ESPN 5-star small forward Taylor Bo Bowen, 6-8, 195, of Newport (R.I.) St George’s, said the Razorbacks reached out to him. He’s also rated the No. 5 player nationally at his position.

Center Gus Yalden, 6-8, 240, of IMG Academy in Florida, said he was contacted by Musselman.

Power forward Justin McBride, 6-6, 205, of Oak Hill Academy in Virginia, said the Razorbacks reached out to him.