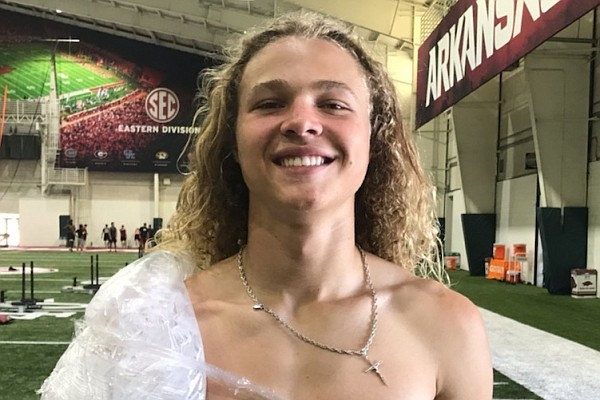 Perhaps no one is taking advantage of college football on-campus recruiting being open more than Avery Johnson, who was at an Arkansas camp on Monday.

Johnson (6-3, 180) has already been to nine college since June 1 and wants to get to at least three more before the month is over.

That included a stop at Arkansas on Monday, where he and several of his DomX 7-on-7 teammates put in some work and looked over what the Razorbacks have to offer.

“It has been great to get out here and meet some of the coaches that have been recruiting me here at Arkansas and seeing them face to face and let them coach me for a day,” Johnson said.

“There are definitely great coaches here at Arkansas, coaches that have coached at all different levels and coached at different places,” Johnson said. “Coach KB told me that he coached Robert Griffin III and that’s when he won the Heisman Trophy, so he has been around great guys and been around winning before. He knows what it takes.”

Johnson visited Kansas State on his own before flying to Florida and beginning a bus tour of campuses with his DomX teammates, who play a 7-on-7 national schedule in the winter and early spring.

They visited a day each at Florida State, Alabama, Auburn, LSU, Texas A&M, Texas, TCU and finished the tour at Arkansas.

He plans to visit four more schools individually in June.

“I am planning on going to Nebraska on the June 18, Kansas on June 20, and Missouri on June 23,” Johnson said. “I am also trying to get down and see Notre Dame, but the day I am going there is not final yet.”

Johnson, who was 117 of 207 passing for 2,109 yards and 15 touchdowns and added 10 scores rushing as a sophomore, holds offers from Arkansas, Ole Miss, TCU, Iowa State, Kansas, Kansas State and Washington State.

Johnson believes he is getting a lot of pertinent information on possible future destinations.

“It’s been fun visiting all the schools and kind of getting to match up and see where everybody’s facilities are at, but at the end of the day it is about what coaches you like the most,” Johnson said. “The facilities and all that are nice, but if you are not in a good relationship with the people you are around, you won’t want to spend four years there.

“Definitely the facilities are great to see, but to me, it is mostly about the relationships.”

Johnson is not in a hurry to make a decision, but also doesn’t want to wait long as he knows quarterbacks can help recruit a class for their chosen school.

“So pretty much a lot of schools like to see quarterbacks throw before they offer, so I am planning on playing this junior season and then after my season kind of see where everything is at with the schools and make my decision,” Johnson said.

All of his visits this summer are unofficials.

“I will wait until next year for all my official visits,” Johnson said. “I also have high school 7-on-7s this summer after I see all these schools.”