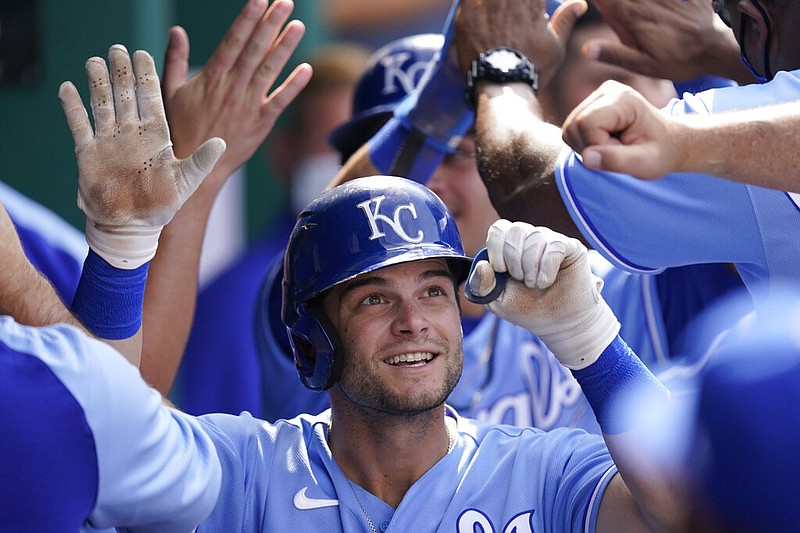 Kansas City Royals' Andrew Benintendi celebrates in the dugout after hitting a home run during the fifth inning of a baseball game against the Minnesota Twins Saturday, June 5, 2021, in Kansas City, Mo.(AP Photo/Charlie Riedel)

There are currently six active former Razorbacks in Major League Baseball. Here is a roundup of how they have performed as the middle of the season approaches:

After missing most of the shortened 2020 season due to a strained right rib cage, Benintendi was traded to the Royals, and he got off to a slow start. He hit .225 with 1 home run and 4 extra-base hits in the month of April.

Benintendi has since shaken off the slow start and was hitting .283 with 8 home runs and 31 RBI as of Sunday. Unfortunately for the former Golden Spikes Award winner, he has landed on the 10-day injured list with a fractured right rib.

"He had something grab when he threw [against the Oakland Athletics] with the ball off the wall," Royals manager Mike Matheny told reporters, according to the Kansas City Star. "He'd been feeling a little bit of something for a while. Obviously, it wasn't affecting his swing. On the throw, it grabbed him.

"He was fine last night. Woke up today and it wasn't right. He had it X-rayed."

Behind the plate, McCann has caught 9 of 19 would-be base stealers. As a team, the Mets are third in the MLB behind the Cleveland Indians and St. Louis Cardinals in caught stealing percentage with 37% of potential base stealers being thrown out. McCann has also played five games for the Mets at first base, the first position he's played other than catcher in the MLB.

He has not committed an error at first base and he made this really nice play in his first game at first.

This was literally the first ground ball James McCann had ever fielded at first base in his 12-year professional career. pic.twitter.com/O3Xbxz130a

In his second year on the south side of Chicago, Keuchel is 6-1 with a 3.78 ERA in 14 starts. The White Sox have won six of the last seven games that he has started, and the team is currently tied for the best record in baseball with the San Francisco Giants at 43-25.

In his last start against the NL East-leading Tampa Bay Rays, Keuchel tied his season high with seven innings pitched. He allowed 4 hits and struck out 5 batters in the 3-0 win.

Parker was called up from the Indians AAA affiliate earlier this month and has made five relief appearances. With the promotion, Parker has now played for seven teams: Chicago Cubs, Seattle Mariners, New York Yankees, Los Angeles Angels, Minnesota Twins, Philadelphia Phillies and the Indians.

In 11 starts he has pitched six innings four times and allowed 35 earned runs. His WHIP (walks and hits per innings pitched) is 1.411, which is over .200 points higher than the MLB average. Smyly did earn his first win since May 14 in his last outing Sunday against the Miami Marlins.

Stanek was another former Razorback who was on the move during the offseason. After four years in Florida, two with the Rays and two with the Marlins, Stanek signed a one-year, $1.1 million deal with the Astros.

Stanek's ERA would be 2.88, but an outing against the Texas Rangers in May in which he recorded just one out and allowed four earned runs, raised it.

Stephan made his Major League debut on April 3. Since then he has thrown in 17 games, finishing seven of them, and has an ERA of 4.07. In 24 1/3 innings pitched he has given up 25 hits, but has also struck out 28 batters.

The reliever has also given up six home runs and walked 16. The months of May and June seem to be treating Stephan better. After giving up at least one earned run in five of seven appearances in April, he has given up a run or more in just two of his last 10 appearances.

Anderson was moved to the 60-day injured list this week. He was first put on the IL on May 25 with left shoulder subluxation.

He will not be available until July at the earliest.

Beeks had Tommy John surgery in August 2020. He is currently listed on the Rays 60-day IL.