By: Halle Roberts, Special to the Democrat-Gazette
Published: Thursday, June 17, 2021 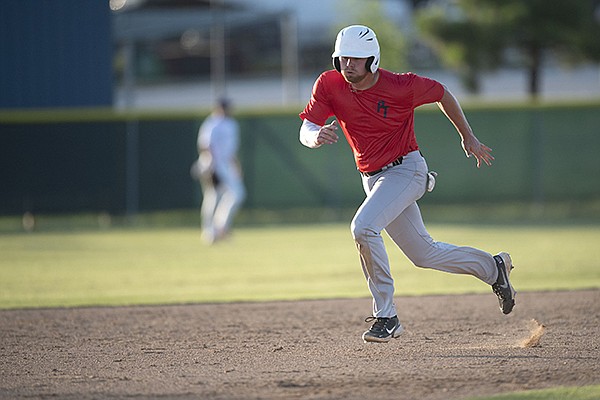 SPRINGDALE — Blake Adams is staying home for the summer to work with Perfect Timing Red in the collegiate baseball league.

The Springdale Har-Ber alumni and former University of Arkansas baseball player is no longer with the Razorbacks program, entering his name into the transfer portal.

“I really need to pitch some innings and get some at-bats this summer,” he said Tuesday night at Tyson Park as his PT Red team prepared to play a team out of Tulsa, Okla. “The next school I go to I want to hit, so I’m really trying to get 20-25 innings of pitching and then probably 60-65 at-bats.”

Adams was one of the most decorated players ever at Har-Ber. He began his freshman year with the Wildcats as a pitcher for varsity. Throughout his prep career, he proved his talent time and time again.

By the time his senior year rolled around, the right-handed Adams was reaching 95 mph and helped his team reach the state tournament four years in a row, and won the state title in 2018.

He committed to Arkansas in 2018, signing with what he called his dream school. Now as a soon-to-be junior, he is moving away from the Razorbacks and has narrowed his next program down to a few schools before he makes a decision.

As the summer progresses, Adams said he isn’t only focused on reps and increasing the amount of times he sees the mound, but more importantly, fine-tuning the skills he already has.

“When I started to struggle a little last year, it’s because I couldn’t locate my off-speed (pitches), so I was relying on my fastball and ended up getting hit a little bit,” Adams said.

His decision has been narrowed down to a top three out of the six Division I schools that are interested in helping him continue his career as a two-way player.

“Blake is gonna pitch,” said PT league director Zach Bottoms. “He’ll start one day a week and then be in the outfield for the rest of the time.”

Adams has a home run and a double under his belt to start the season with PT Red, which plays all of its games at Tyson Park four days a week.

“He’s shown to be a good hitter, very competitive at the plate,” Bottoms said.

Perfect Timing Red suffered a tough 9-2 loss against Sandlot Silver on Tuesday as Blaze Quarnstrom and Brady Gibson put up RBI singles to earn Red’s only two runs of the game.