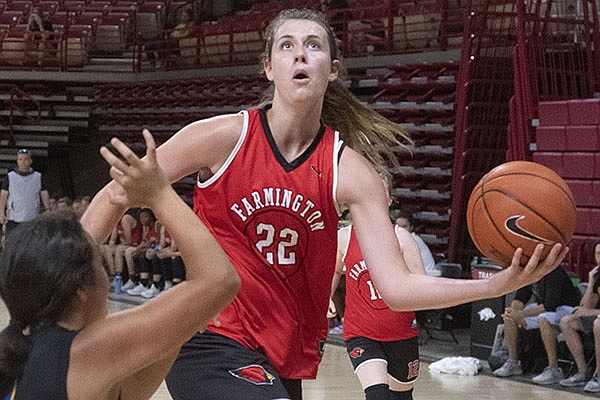 Farmington's Jenna Lawrence goes up for a shot during a team camp Wednesday June 16, 2021, at Bud Walton Arena in Fayetteville.

FAYETTEVILLE — Jenna Lawrence has been with the Farmington girls basketball team for a little more than two weeks, but Lady Cardinals Coach Brad Johnson has seen enough.

In just a couple of practices, the 6-2 junior has flashed the skills that caught University of Arkansas women’s basketball Coach Mike Neighbors’ attention during the Razorbacks team camp at Walton Arena on Wednesday.

Lawrence’s versatility and athleticism were on display. She cleared a rebound against Mountain Home and rather than look for a guard, Lawrence streaked down the floor and fired a bullet pass from just past midcourt to a teammate, who converted the layup.

“She’s picked up everything really fast,” Johnson said. “She’s hit the ground running. She’s a high basketball IQ kid, very quick study and a good teammate. Kids that have played for a long time and understand the game usually can kinda fit in wherever they go, and she’s a testament to that.”

The Arkansas commitment later got a steal and took it herself for the layup. A teammate also connected with Lawrence on a modified version of an alley-oop. The timing was perfect off an out-of-bounds play as Lawrence left her feet and tipped the ball into the basket.

Those types of plays are why Neighbors offered her a scholarship a year ago and Johnson is smiling today.

Lawrence, 16, showed up a day before the team headed to Missouri Western. She got one other day of practice before the Lady Cardinals headed to Pittsburg State. They also took part in a local team camp before finishing up their eight competitive dates for the summer this week in Fayetteville.

Johnson said opposing coaches have been shocked when he tells them Lawrence has only been with them a short time.

“It’s a case if you didn’t know, then you don’t know that she’s new with us,” Johnson said. “She’s got one of those interesting personalities. As a coach, she’s come in and really fit like a glove.”

Lawrence acknowledged it’s not been easy moving away from childhood friends and family in Melbourne, but basketball has made the transition easier.

“Moving three-and-a-half hours has been difficult,” she said. “I had a couple of friends up here already. I’ve felt like me and the team has really connected. It’s kinda hard but we’ve adapted.”

Johnson was already intrigued by his group, which lost two starters from a Class 4A state runner-up team. Adding Lawrence gives him more reason for optimism.

“It’s an interesting group with the ability to really score at the guard position,” Johnson said. “You add Jenna Lawrence, she’s 6-2 and can play multiple positions, guard multiple positions. And what we do in our transition offense, she’s a very interesting piece to add to that puzzle because she can do so many different things well.”

He’s learning more about Lawrence each day, too.

“I knew she was a good player, obviously, but you get a player like that out on the practice floor and you see how many tools they have,” Johnson said. “She’s really impressive. There’s a lot to her game I didn’t even realize was there. We’re excited she’s here.

“Moving’s hard and it’s toughest on kids. It’s been two phases, her being able to fit in like she has and our kids immediately bringing her in and making her a part. It’s what you hope would happen and it has.”

Johnson and Lawrence are both excited for Farmington’s future.

“I’d love to tell ya I’ve got it all figured out,” Johnson said. “I do not. As we go along, we’re gonna find things that we’re good at that I don’t even know yet. I do believe the ceiling is high for this group.”

“This is just the perfect fit for me,” Lawrence added.

And it’s not far from the University of Arkansas, her expected next destination.