Henley getting a closer look at future home 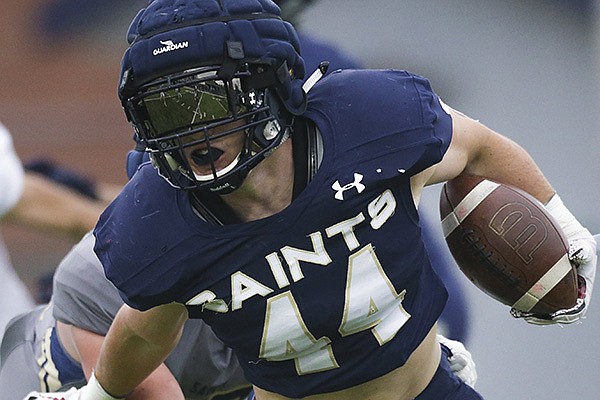 Shiloh Christian linebacker Kaden Henley runs with the ball during a scrimmage Thursday, May 20, 2021, in Springdale.

Shiloh Christian linebacker and Arkansas 2022 pledge Kaden Henley has one of the shortest drives of the Razorbacks’ 2022 commits to visit the Fayetteville campus.

He’ll do so this weekend as one of seven or so prospects planning to take official visits with the Razorbacks.

“I take my official visit this weekend and I am pretty excited about that,” Henley said. “I am looking forward to seeing some of the guys.

“I feel like I have seen everything, but I am looking forward to getting up there and spending the night and just getting the real feel of Arkansas.”

Henley, a 3-star prospect who Arkansas offered on March 10 and who committed just a few hours later, was on campus last week while taking part in an Arkansas football camp.

Shiloh Christian head coach Jeff Conaway is a big fan on and off the field of Henley (6-1, 225 pounds), who has 225 tackles, six sacks and five interceptions over the last two seasons.

“Kaden is extremely talented, very gifted, but what people don’t see is the work to becoming the force that he is on the football field,” Conaway said. “He is extremely productive in all three phases of the game for us as he plays middle linebacker, fullback and he was also exceptional on special teams with a couple of blocked punts.

“He is disruptive in all three phases.

“But what I love most is just who he is as a person. He is a young man of faith. He loves his family and his teammates and his coaches and he does a great job with our youth league kids. He really does invest in them.

“We are excited to watch him as a senior at Shiloh Christian and can’t wait for him to become an Arkansas Razorback.”

Henley is part of an Arkansas 2022 recruiting class that has 11 pledges and is ranked 19th nationally in 247 Sports composite rankings that also include the prospects assessments of ESPN and Rivals.

That list could grow by one more on Sunday when Maumelle defensive tackle Nico Davillier (6-5, 270) announces his college choice between Arkansas, Oklahoma and Nebraska.

“I wouldn’t say I’m as good a recruiter as the other (committed) guys, but I am trying to help build our class just like the other guys,” Henley said.

If Davillier picks Arkansas, it will mean that 9 of the 12 in-state 2022 prospects offered by the Razorbacks will be staying home.

“I love it how the coaches are recruiting in state so hard,” Henley said. “I feel like it is different for kids to go compete for their home state and put on that home jersey.”

Henley is excited about being recruited and coached by Arkansas linebackers coach Michael Scherer.

“I talk to him a couple of times a week and we have a good relationship,” Henley said. “He always just seems to reach out to me and just make sure everything is going alright.”

Shiloh is coming off a Class 4A state championship season in which it went 14-1 with lone loss in week three to Page, Okla., 27-26.

The Saints also have another Division I prospect in junior quarterback Eli Wisdom (6-0, 170), who has an offer from Central Florida and interest from Arkansas and Memphis among others.

“One of the things he can really improve on over the last two years is that he can makes all the throws we ask him to and that really makes him hard to defend.

“His ability is why we led the state in points last season.”

“The biggest thing is that it just builds our brotherhood just by hanging out with each other,” Henley said. “We are going to go out there and compete and try to win it.”