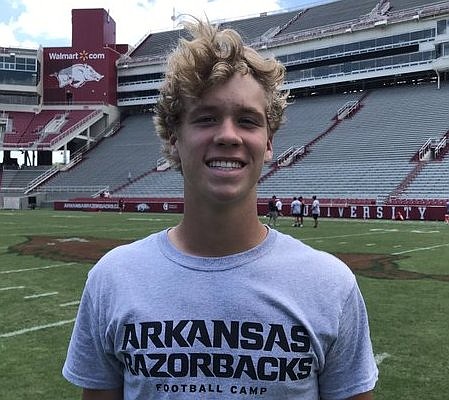 Pulaski Academy sophomore quarterback Kel Busby has an offer from Arkansas baseball and is hoping to earn one from the Razorbacks football team, too.

“This kid could develop into four or five star,” Lucas said. “I know that’s one of the biggest things now, but I think he could definitely be a four or five star. He has a great arm and understands the game and he’s always trying to find that extra niche or extra way he can get better as a quarterback.

"He has the potential to be really, really good.”

Busby, who throws right handed, is credited by Prep Baseball Report for hitting 87 mph on the radar gun. He was told he hit 90 mph during a game against Pocahontas in the state tournament.

He made 11 appearances on varsity while starting nine games for the baseball Bruins this spring as a freshman. He had a 5-2 record, finished with an ERA of 0.96 and had 65 strikeouts in 43 2/3 innings. Opponents hit .132 against him.

Busby, whose father stands 6-5, is playing for the Arkansas Sticks this summer.

He was able to show his talent against older quarterbacks on Sunday.

“It was great to compete against the older guys and see all the other arms compared to mine,” he said.

His uncle, former Razorback Bo Busby, was an All-Southwest Conference safety in 1975. The chance to throw in Razorback Stadium was a cool experience for Busby.

“It was great. Nothing like it,” Busby said. “It’s second to none. It’s awesome out here. It was a great experience.”

"He’s always wanted to be the best," Lucas said. "When he’s not winning, he’s the kind that puts it upon himself to try to find the things he does wrong or did wrong to make sure he is successful the next time."