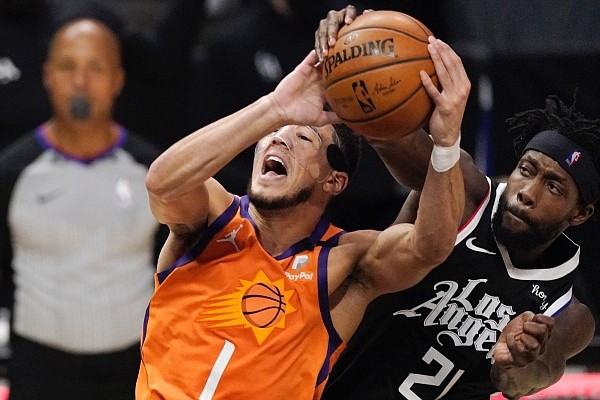 Two former Arkansas basketball players are on rosters of teams remaining in the 2021 NBA Playoffs. Here is an update on their performances:

The scrappy former Arkansas guard best known for his defensive play helped the Clippers climb back into their Western Conference finals series against the Phoenix Suns on Thursday.

In Los Angeles’ convincing 106-92 win in Staples Center to pull within 2-1, Beverley scored 8 points on 3 of 8 shooting, including 2 of 6 from 3-point range, grabbed a series-high 6 rebounds and added 1 steal and 1 block. The Clippers outscored the Suns by 24 points when he was on the floor.

It is Beverley's best plus/minus in a playoff game since May 2017, when he was a member of the Houston Rockets.

Beverley’s first three-pointer came in the first quarter, giving Los Angeles a 5-2 lead. His final two buckets came in the fourth quarter, when he connected on a left-corner three that pushed the Clippers’ lead to 104-88 and a floater that followed a terrific individual move against Phoenix wing Mikal Bridges.

But above all else, Beverley has relished each matchup with Phoenix star and former Kentucky guard Devin Booker, and he has been effective defending him of late. In Game 2, Booker shot 2 of 7 with Beverley defending, and he limited Booker to 1 of 6 on Thursday.

The Suns star, wearing a transparent plastic mask to protect a battered nose after knocking heads with Beverley in Game 2, matched his worst shooting percentage of the season in the loss (23.8%). With Los Angeles hanging on to an 89-83 lead with 6:45 left, Beverley blocked a corner three-point attempt by Booker, sparking a transition score by Reggie Jackson.

“He’s denying, limiting touches,” Booker said Thursday of Beverley, according to the Los Angeles Times. “He has one objective out there, and we understand that.”

Beverley nearly allowed the Clippers to steal homecourt advantage in the series in Game 2 on Tuesday, forcing a Booker turnover in the game’s final minute as Los Angeles led by one. Paul George was fouled on the ensuing inbound pass and awarded two free throws, but missed both, leaving the door open for the Suns.

Phoenix then added the game-winning score with less than one second remaining to grab a 104-103 win.

It is safe to say Portis was prepared to play in Game 1 of the Bucks’ Eastern Conference finals series against the Atlanta Hawks.

Milwaukee ultimately fell 116-113 on its home floor, but Portis performed well offensively after drawing three consecutive DNPs to close the Bucks’ second-round series against the Brooklyn Nets. He finished with 11 points and grabbed 8 rebounds.

The former SEC player of the year knocked down 5 of 8 shots, including 1 of 2 from three-point range, and set a playoff career high with 3 offensive rebounds, which led to 4 points.

Portis provided Milwaukee some pop off the bench late in the first quarter.

He scored three times in the final 2:12 on a layup, dunk and right-wing three — all assisted by guard Jrue Holiday — to give the Bucks a 28-25 lead after one. The layup was his first bucket in nearly two weeks.

In the second quarter, Portis added a putback layup after rebounding a Khris Middleton miss in the lane, and his final score — a putback in transition — brought Milwaukee within 86-80 with 1:50 to play in the third quarter.

The Bucks played Atlanta even in Portis’ 14 minutes, 42 seconds on the floor.

On Friday, he helped Milwaukee pull even in the series with a convincing win at home. Portis pitched in 8 points on 3 of 7 shooting and grabbed 3 rebounds in a 125-91 rout.

He knocked down 1 of 3 attempts from three-point range and added a steal, block and an assist in his 17-plus minutes. The Bucks were plus-8 in his time in the lineup.