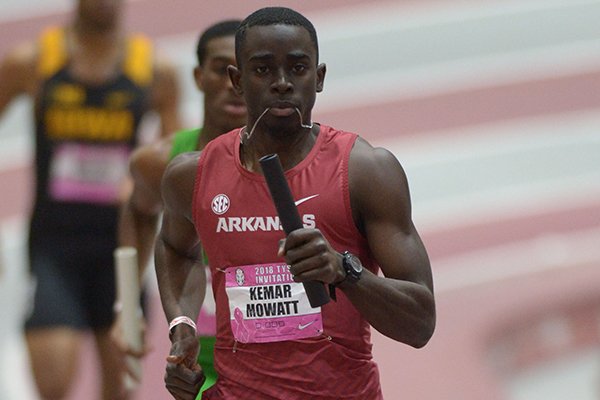 Arkansas' Kemar Mowatt competes in the 4x400-meter relay Saturday, Feb. 10, 2018, during the Tyson Invitational in the Randal Tyson Track Center in Fayetteville.

Former University of Arkansas All-American Kemar Mowatt made Jamaica's Olympic team Friday night by taking third in the 400-meter hurdles in 49.61 seconds at the Jamaican Trials held in Kingston.

Jarrion Lawson, who won NCAA titles for the Razorbacks in the jumps and sprints, advanced to Sunday night's long jump final at the U.S. Olympic Trials at Hayward Field in Eugene, Ore.

After Lawson fouled on his first two attempts during Friday night's qualifying round, he faced a do-or-die situation and went a wind-aided

Arkansas native Jeff Henderson, the 2016 Olympic gold medal winner who grew up in McAlmont and attended Sylvan Hills High School in North Little Rock, was seventh in the long jump to advance to the finals. His best mark was a wind-aided 26-3 3/4 on his second attempt.

Will Williams, an assistant coach at Arkansas State University who won an NCAA long jump title at Texas A&M, finished 15th Friday night with a best mark of a wind-aided 25-5 1/2 on his third attempt.