Part 1: A look back at the greatest seasons by a Razorback 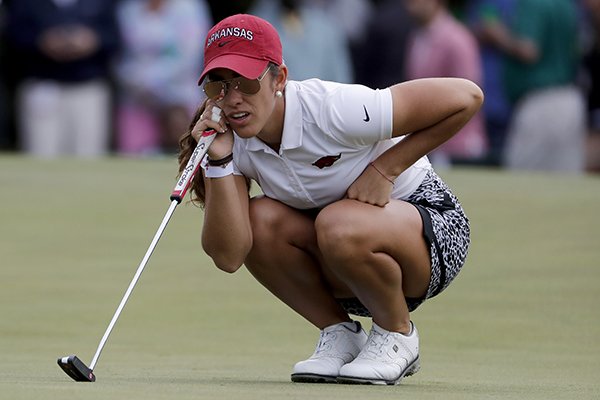 Maria Fassi eyes her putt on the first hole during the final round of the Augusta National Women's Amateur golf tournament in Augusta, Ga., Saturday, April 6, 2019. (AP Photo/David Goldman)

FAYETTEVILLE — Accolades have poured in this summer for University of Arkansas pitching ace Kevin Kopps, and for good reason.

His ERA of 0.90 — meaning he allowed less than one earned run per nine innings pitched — was far better than any other pitcher in the country. The same goes for his 0.76 WHIP, a product of walks plus hits divided by innings pitched.

Kopps’ standout season, for which he’s already won multiple national player of the year awards, ranks among the best individual seasons ever for an Arkansas Razorback in any sport.

The Sugar Land, Texas, native’s sensational season prompted the question: Who has compiled the most significant single seasons by Razorbacks, regardless of sport?

To judge the candidates, the Arkansas Democrat-Gazette set up this general criteria: The player must have received a national award or won an individual championship, earned All-America distinction or conference player of the year, or had a school record-setting season.

We shuffled through the history of Razorback athletics to come up with this list of 20 of the best all-time seasons by a Razorback.

The entries will be sorted into two groups, and the 10 most outstanding seasons in football, baseball, basketball and softball will be recognized Sunday; the 10 best seasons in all other sports today.

The entries are not ranked and are presented in alphabetical order.

There have been many outstanding seasons by Arkansas track and field athletes, but perhaps none compare with what Mike Conley pulled off in 1985 as the linchpin on Coach John McDonnell’s first NCAA triple crown-winning team.

After winning the NCAA Indoor long jump and triple jump crowns, Conley had a four-day experience at the NCAA Outdoor Championships that concluded with 28 3/4 points. Conley won both the long jump — where he matched his then-meet record of 27 feet, 8 inches — and the triple jump with a leap of 57-6 1/2, an inch shy of Willie Banks’ American record at the time.

On Friday at the NCAAs, Conley won the long jump, ran the third leg on Arkansas’ sixth-place 400-meter relay team, then ran the 200 final, his first go at the sprint that season. Conley held the lead entering the straightaway, but he was nipped by Houston’s Kirk Baptiste — the silver medalist in the 200 from the 1984 Los Angeles Olympics — and finished second.

Conley’s son, Mike Jr., is a 14-year NBA veteran with a 14.9 scoring average and 850 career starts who played collegiately at Ohio State and is now with the Utah Jazz.

A native of Johannesburg, South Africa, Cragg wound up running internationally for Ireland, but not after a bang-up career as a Razorback.

He wound up winning seven NCAA titles and was a 13-time All-America selection with the Razorbacks from 2002-04 before beginning his professional career.

Former Arkansas coaching great John McDonnell, speaking of Cragg prior to the 2008 Beijing Olympics, said, “He’s one of the best I’ve ever had at running a hard pace and then picking it up even a little bit more. His threshold for pain is enormous.”

Yes, Maria Fassi won the NCAA individual championship as a senior in 2019 on her home course at Blessings Golf Club in Fayetteville. That victory put a cap on a brilliant career and a strong season.

The native of Pachuca Hidalgo, Mexico, opened the season with wins at the Mason Rudolph Classic (at 16-under par) and the ANNIKA Intercollegiate during the fall.

She was just heating up. Fassi opened the spring slate with three consecutive victories at the Lady Puerto Rico Classic, the Darius Rucker Intercollegiate and the Evans-Derby Experience.

Fassi finished second to South Carolina’s Ainhoa Olarra in a playoff for medalist honors at the SEC Championships, but she helped her team to its first conference title with a 3-0 record in match play with wins against Florida, Alabama and South Carolina.

Fassi stayed hot in her next outing, taking medalist honors at the NCAA Austin Regional with a pair of 69s bracketing a 70 for her sixth win of the season.

The challenging layout at Karsten Creek in Stillwater, Okla., at the NCAA Championships had her off of her game, as Fassi was 66th, her only finish outside the top 12 on the season.

Grable’s senior season was undoubtedly the best in UA gymnastics history. The 5-footer from Oshkosh, Wis., won the NCAA floor exercise title (9.9625) and shared the vault championship with a career-best 9.975 for the first individual titles in the 12-year history of the program. She scored a pair of 10s from among the six judges in both events at the NCAAs in Birmingham, Ala.

Grable earned first-team All-America status on the all-around, the floor and the vault, and was also named SEC gymnast of the year in her huge 2014 season.

One of the all-time great seasons in Arkansas track and field came from Lawson, who pulled off an NCAA triple in the 100 meters, 200 and long jump at Hayward Field in Eugene, Ore.

Lawson achieved a feat last accomplished 80 years earlier by the greatJesse Owens in 1936 with wins in those three events.

“I came in expecting to win three events,” Lawson said after the meet. “I know obviously that it’s hard to do, but I do all these events because I love doing them and I definitely came here wanting to start off with a win in the long jump, and I knew that momentum would carry over to today.”

Lawson, a native of Texarkana, Texas, won the Bowerman, an award given to the nation’s top track and field athlete, as a senior in 2016.

A bronze medalist at the World Juniors in Barcelona in 2012, Lawson went on to win the silver medal in the long jump at the 2017 World Championships in London.

Lewis overcame scoliosis — a spinal curvature that forced her to wear a corrective brace 18 hours a day for six-plus years and eventually required surgery — to post a record-setting career at Arkansas. Her sterling college career featured 12 tournament wins and was capped by her victory in the 2007 NCAA Championships.

The junior entered the final round of the NCAAs in Daytona Beach, Fla., in third place but fired a blistering 66 to win the event by two strokes.

Lewis, a native of Toledo, Ohio, who grew up in The Woodlands outside Houston, had a decorated career with the Razorbacks that included four All-American seasons after undergoing back surgery as a redshirt freshman.

Lewis was selected as Golf Digest’s Amateur of the Year in 2007, as well as winning the Dinah Shore Trophy. She followed her NCAA win with a victory at the Southern Amateur and a second-place showing while leading the U.S. team to a win at the Copa de las Americas.

Still an amateur, Lewis was awarded the title of the 2007 NW Arkansas Championship, which was shortened by rain.

A two-time All-American, no other Razorback has come close to Miseviciute’s 52 singles wins in 2008. The native of Klaipeda, Lithuania, spent part of the season ranked No. 1 by the Intercollegiate Tennis Association.

That’s where Miseviciute’s run ended, as she fell 7-6 (7-2), 6-4 to Baylor’s Zuzana Zemenova, the eventual runner-up to Georgia Tech’s Amanda McDowell.

Miseviciute is the runaway Arkansas leader with 125 career singles victories and 86 doubles victories with Ela Kaluder.

She won All-America honors in 2008 and 2009, and captured one tournament victory on the ITF Women’s Circuit before retiring in 2011.

Brooke Schultz burst on the collegiate scene as a freshman during the 2017-18 season.

A silver medalist on the 3-meter springboard at the 2017 World University Games in Taiwan, Schultz had a massive debut season with the Razorbacks. The SEC female diver of the year won the 1-meter and 3-meter titles at the SEC Championships, the first conference diving championships in program history.

Schultz was named SEC diver of the week seven times and doubled as the SEC freshman diver of the year. She set a personal best score of 399.45 at the NCAA Championships in the 3-meter synchronized while winning the individual title with her father Dale Schultz serving in his third stint as the UA’s head diving coach.

She continued to rack up accomplishments in her banner 2018 season as a World Cup team member and bronze medalist at the Bolzano FINA Grand Prix.

The Razorbacks’ first national champion in golf, Sikes’ dramatic victory at the 1963 NCAA Championships was just a portion of his gigantic year.

During the course of that season, the Springdale native finished runner-up at the U.S. Amateur Championship, was ranked as high as No. 3 in the country among amateurs, played in the Masters (where he finished 46th) and was a quarterfinalist at the British Amateur.

The NCAA determined its medalist in a different fashion in Sikes’ time, rather than four rounds of stroke play as is done now.

Sikes held the lead after two rounds of stroke play, shooting 69 and then 70 at the Wichita State Country Club in Wichita, Kan., then he faced four rounds of match play. Sikes downed Texas A&M’s Harry Hoskins 5 and 4, North Texas’ Bobby Greenwood 2 and 1 and Texas’ Pat Thompson 5 and 4 to reach the 36-hole final. Sikes and San Jose State’s John Lotz were tied through 36 holes before Sikes birdied No. 1, the 37th hole, to claim the hard-earnedtitle.

Sikes won back-to-back Amateur Public Links titles in 1961 and 1962, then he played a part on winning U.S. teams at the Walker Cup and the America’s Cup in his massive 1963 season.

Walder ruled the NCAA long jump and triple jump scene in the mid-1990s with 10 NCAA titles before going on to a strong professional career.