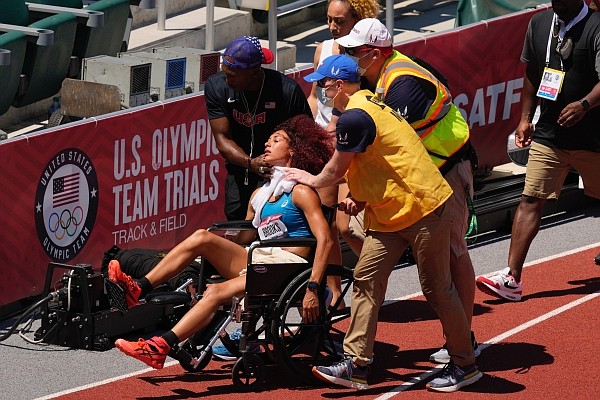 Taliyah Brooks is helped off track after collapsing during the heptathlon at the U.S. Olympic Track and Field Trials Sunday, June 27, 2021, in Eugene, Ore. Events were suspended due to high temperatures. (AP Photo/Charlie Riedel)

Taliyah Brooks, an NCAA champion at the University of Arkansas who lives in Fayetteville, fainted in the excessive heat and wasn't able to complete the heptathlon Sunday during the U.S. Olympic Track and Field Trials at Hayward Stadium.

After Brooks was assisted off the track in a wheelchair and received medical treatment, her request to re-enter competition for the javelin and 800 meters Sunday night was granted by the USATF Games Committee.

But Brooks, who fainted while warming up for the javelin, eventually decided to withdraw from the competition.

Temperatures on the track exceeded 150 degrees Sunday afternoon according to a USA Track and Field official, NBC reported.

Before Brooks withdrew, her agent, Tony Campbell, told The Associated Press she was "OK" after fainting.

Brooks scored 4,908 points through five of the heptathlon's seven events and was in fourth place after she began Sunday's completion by going 20 feet, 10 1/2 inches in the long jump.

All events Sunday afternoon were delayed until the evening with temperatures reaching 108 degrees.

Fans were filing into the stadium for the headline races of the final day of Olympic qualifying when, The AP reported, the track announcer came onto the public address system and said competition was being suspended due to extreme heat. Spectators were asked to evacuate.