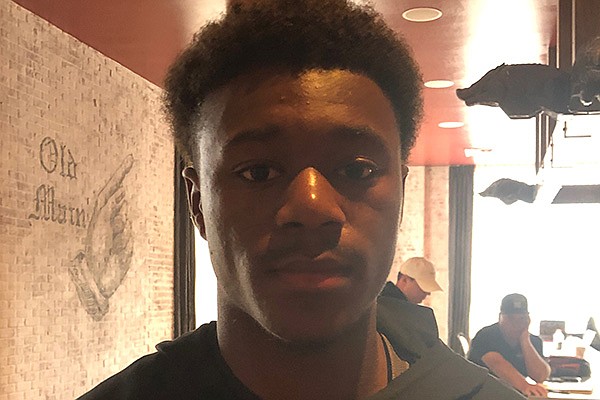 Arkansas got its chance this weekend to host one of the nation’s best football players in Tulsa (Okla.) Booker T. Washington 4-star athlete Gentry Williams.

Williams (6-0, 170 pounds), also a outstanding trackster, moved his official visit to Arkansas to this weekend after previously having it scheduled for the fall.

“I am glad I decided to take this official visit when I did,” Williams said. “I was supposed to wait until the Arkansas-Texas game (Sept. 11) to take one, but I feel like this time was perfect. I am still going to come to that, but to be able to come now and spend a whole weekend and just hang out was great.”

Williams, who has a top six of Arkansas, Oklahoma, Southern Cal, Florida, LSU and Missouri, got the chance to visit with Razorback defensive backs coach Sam Carter.

“The visit to Arkansas was very enjoyable,” Williams said. “Just to spend time with Coach Carter and the whole entire staff at Arkansas was great. They were really nice to me and my family.

“Going to the track facilities and being able to see those was great for me. They are state of the art, next level and I can see why Arkansas competes highly in all of their sports.”

Williams, who has played quarterback, receiver and defensive back for Booker T. Washington, also got a chance to catch up with former teammate and Arkansas defensive back Keuan Parker.

“Keuan has always been like an older brother to me, somebody that I could lean on when it comes to stuff like this,” Williams said. “He just told me that Arkansas is going to keep it real with you. Everything they say is how it is going to be.

“He has not necessarily pushed me hard because our relationship is a little bit different, but he has great things to say about Arkansas.”

Williams is coming off a junior year in which he had a season-ending knee injury in Week 2.

“It has been a long journey, but I am thankful for it and the road,” Williams said. “I have been grinding to get back to where I had been. Now the time is coming close to my last season, I am just thankful and I am just trying to get my mind and my body ready.”

Williams also had Michigan, Nebraska, Oklahoma State and Georgia in his top 10 before eliminating those four.

“I really am still with a top six and I have talked to all those schools consistently. Narrowing it down to one school in the fall is probably how it is going to be.”

Booker T. Washington has talent, but Williams also believes the program has the right mindset with its returnees.

“I’m going into this season knowing that I am one of the leaders of the team and I know we are going to be able to compete highly in the things that don’t require talent,” Williams said. “I am very confident in the team in that aspect of the game.

“I think if we can just get it going and try not to the best team in week one, but the best one in Week 10, then we will be fine.”