Pro Hogs roundup: Portis back in a groove for Bucks 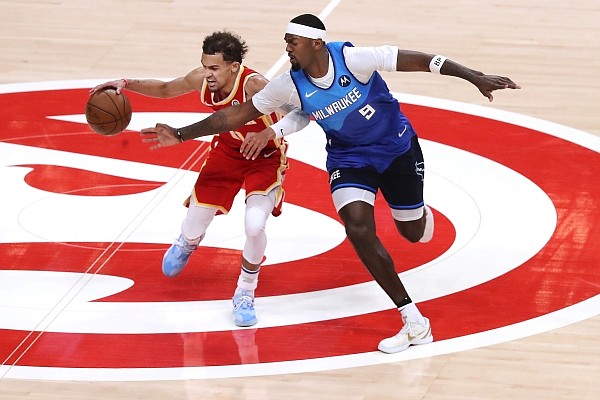 Two former Arkansas basketball players are on rosters of teams remaining in the 2021 NBA Playoffs. Here is an update on their performances:

Not since his first playoff game in 2017 has Portis had a postseason scoring outburst like he did Sunday.

In Game 3 of the Eastern Conference Finals against the Atlanta Hawks, Portis added 15 points on 7 of 12 shooting, 4 rebounds and 2 steals, giving him two double-digit scoring games in the series. His playoff career high is 19 points.

Portis' three consecutive DNPs in the second round vs. Brooklyn appear to be a thing of the past.

Since that stretch, Portis has averaged 10.3 points on 50% shooting and 5.5 rebounds per game, and Milwaukee is two wins away from an NBA Finals appearance.

“I just try to bring energy every day,” Portis told reporters after Game 3. “I just go out there and play my role and be myself every day and try to bring some juice off the bench.”

After dropping Game 1 at home, Milwaukee bounced back with a 125-91 win over Atlanta in Game 2. Portis pitched in 8 points on 3 of 7 shooting, 3 rebounds, 1 block, 1 assist and 1 steal, and the Bucks were plus-8 with him on the floor.

His first bucket was a left-corner three-pointer assisted by Giannis Antetokounmpo that put Milwaukee ahead 29-20 in the first quarter. Then came a hustle bucket. After a Bucks score to make it a 45-35 game, Portis stole an inbound pass and hit a short hook shot over Hawks forward Clint Capela.

In Game 3, a 113-102 win for the Bucks, Portis was Milwaukee’s third-leading scorer, and his seven made field goals were also third behind Antetokounmpo and Khris Middleton. In his time on the floor, the Bucks posted an outstanding 78.8 defensive rating, according to NBA Advanced Stats.

“It feels good, man, but at the same time we still have a job to do,” Portis said of being embraced by Bucks fans. “It makes my job that much easier knowing that I can just be myself every day. I don’t have to sugarcoat anything or maybe just tone it down a little bit. They want me to be me.

In Game 4 on Tuesday, the Bucks struggled against a Hawks team without star guard Trae Young and lost 110-88. The series is now tied 2-2.

Beverley and the Clippers are still alive in the Western Conference Finals after staving off elimination on Monday.

The former Arkansas guard was largely a non-factor offensively in Game 4 of the series with the Phoenix Suns on Saturday, which Los Angeles lost 84-80 at home. He finished with 2 points on 1 of 4 shooting and was a minus-9.

Beverley was more effective in his role Monday.

In the team’s three losses to the Suns, Beverley has scored 10 total points.

He helped Los Angeles build an early lead in Game 5, driving the lane and finishing a layup over Phoenix wing Mikal Bridges to put the Clippers up 5-0 less than one minute in. Beverley then added two scores in the third quarter to keep the Suns at bay.

In transition, Beverley attacked Phoenix guard Chris Paul off the bounce and scored at the rim for a 69-62 lead. Less than three minutes later, he knocked down a right-wing three following a nice find by Paul George. The triple put Los Angeles up 82-70.

Defensively, he held Phoenix players to 0 of 5 shooting, and Suns guards Devin Booker, Cameron Payne and Paul were a combined 0 of 4 against Beverley.

For the series, he has limited opposing players to 14 of 38 (36.8%) from the floor, the best mark on the team among regulars.

Game 6 is scheduled for Wednesday at 8 p.m. on ESPN.