A look at Razorback baseball commits in the 2021 MLB draft 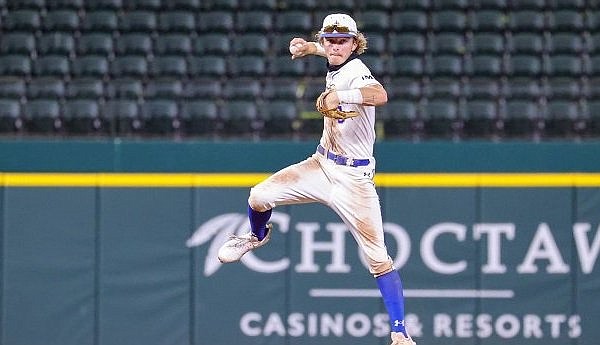 Toward the end of the 2021 season, things seemed to be getting back to normal in college baseball.

Stadiums were opening up, mask mandates were relaxed and cardboard cutouts have hopefully become a thing of the past.

While the fan experience may have returned to normal, the offseason will still be full of question marks for Arkansas coach Dave Van Horn.

"The rosters, I think across the country, are still in the same predicament as last summer," Van Horn said. "Big rosters, there’s a lot of kids in the transfer portal. Then you throw the draft on top of it, they moved it back into July so they could have it around the All-Star Game. They didn’t really think about Division I coaches too much, because it puts us in a bind."

With the first round of the draft scheduled to begin July 11, Baseball America recently released its top 500 draft prospects for 2021. Arkansas has six players on that list, led by Christian Franklin at No. 37.

While these names have become well known among Razorback baseball fans, Arkansas' 2021 signees may not be as familiar. Here is a list of Razorback commits among Baseball America's top 500 draft prospects, and some more information about each player.

Just a reminder, after the five round draft last year, this year's draft will be 20 rounds.

Stovall signed with the Razorbacks in November 2020. At 6-0, 185 pounds, he's not the most physically gifted in the draft, but he has the potential to be the purest hitter in the draft, according to Baseball America, which lists him as a possible first rounder.

Hitting from the left side, Stovall slashed 505/.664/1.031 this spring with 14 home runs, 23 stolen bases, 42 walks and 7 strikeouts. The only downside is his arm strength. It is assumed that he will transfer over to second base at the professional level.

But his offensive stats speak loudly, and if he keeps that end of his game strong then a team will find a spot for him in the field. Enjoy this video of a team chanting "overrated" at him before he hits a home run.

⁦@RazorbackBSB⁩ this is 2021 signee ⁦@peyton_stovall⁩ If you listen closely you can hear the other team mistakenly chanting “overrated” prior to him mashing this homer. I’d say he’s appropriately rated. WOO PIG pic.twitter.com/dis5nQ8LrL

Van Horn said that if Stovall comes to Fayetteville, he will more than likely get some playing time next year.

"If we can get some of these guys to school, and even if we don’t, we’re going to play some younger guys in the field," Van Horn said.

Muncy has second-round potential, according to Baseball America. He's 6-1, 170 pounds and plays shortstop, but is projected to move to third base in  professional baseball.

The right-handed hitter has the ability to drive the ball to the opposite field, but can also hit for power as seen here:

Mad Max Muncy hit a three run homer to centerfield and now Bonita is really in trouble, down 8-3 pic.twitter.com/kjTkLBLCos

Bishop hits and throws from the left side, which paired with his speed has made him an intriguing top-100 prospect, according to Baseball America. He's been clocked at  6.6-6.65 seconds in the 60-yard dash. He even stole home in a game as seen here:

He's 6-0, 176 pounds and has raw power. What scouts have been wary of is his hit for average potential.

2021 Braylon Bishop (AR) with a loud 💣 in Iowa today at the WWBA North Championship showing why he is the #5 player in 2021 class #MLBDraft pic.twitter.com/GG8SASxGnH

Bishop is a three-sport athlete. He played quarterback and safety for Arkansas High School last fall, and finished fourth at the state championships in the triple jump. He has an average arm for a center fielder, but he definitely has the potential to make an immediate impact for the Razorbacks if he makes his way to Fayetteville.

Drew Gray is the brother to Razorback pitcher Evan Gray. Drew would have been rated the top prep prospect in his home state of Illinois if he wouldn't have transferred to IMG in Florida, according to Baseball America.

While he is committed as a two-way player, Drew's potential lies on the bump. At 6-3, 190 pounds, he has two breaking balls, but command of his fastball will be a key for Gray and his success.

While Van Horn didn't mention Gray by name in his season-ending press conference, he did say, "We’ve got a couple, three freshman pitchers that I think can come in here and get after you early."

Smith missed all of the 2020 season with Tommy John surgery. He bounced back in 2021 to throw eight no-hitters.

Smith won't turn 18 until August, so he'll be a three-year guy if he makes it to campus. If he's picked where he is projected, in the fifth or sixth round, Baseball America thinks he'll go to college.

Varnado, 6-2, 175 pounds, has quick hands. According to Baseball America, scouts think his speed could be utilized in center field, but others see his fielding ability as a reason to leave him at shortstop.

Varnado's frame allows him to add some strength, which could be needed before he makes the jump to professional baseball.

The 6-1, 205-pound right-handed pitcher has touched 95 mph. He is a strike thrower, but he lacks projection for this year's draft, according to Baseball America.

Nick Moten (@RazorbackBSB Commit) & Adam Hachman (2023 #uncommitted) were 1 & 2 in K/7 this Spring for ACE members. Both possess a 3-4 pitch mix that have their own separate profiles. As effective as these pitches are, minor tweaks in the future will make them even more elite. pic.twitter.com/RZZ12rv3Yh

Tygart has two pitches that have excited scouts, a fastball that reaches 94-95 mph and a slider. Tygart is tall and lanky at 6-3, 195 pounds, and he sometimes struggles to throw strikes, according to Baseball America.

At 6-3, 220 pounds, he's got the physical attributes needed to hit the ball far. He still has some holes in his swing, which is why he's dropped into the 400s of Baseball America's projections.

At 6-4, 215 pounds, the 17-year-old has potential to hit for power from the left side and fill a corner outfield spot.