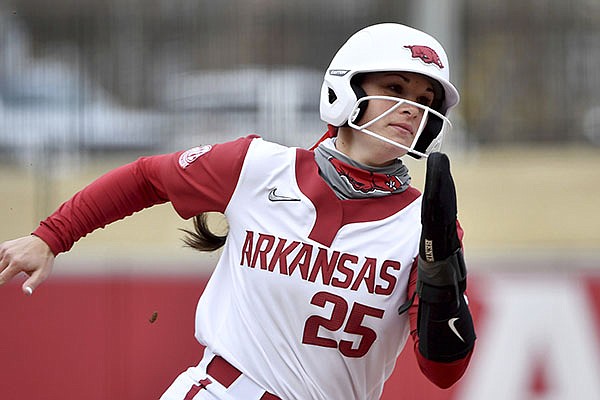 Arkansas base runner Braxton Burnside (25) is shown during a game against North Dakota State on Thursday, Feb. 25, 2021, in Fayetteville. (AP Photo/Michael Woods)

FAYETTEVILLE — The University of Arkansas did not show much hospitality on the field this weekend, as the No. 24 Razorbacks completed a 6-0 run through the Razorback Invitational at Bogle Park on Sunday with an 8-0 win against Texas Tech in six innings.

Since losing two of its first three games on the road to start the season, Arkansas (11-2) has racked up a 10-game win streak. In the six games this weekend, the Razorbacks outscored their opponents, 46-6.

"I think we are firing on all cylinders, right now," Razorbacks coach Courtney Deifel said. "Honestly, the thing that I think we're are doing best, is just being tough. Through every situation that is thrown at them, this team doesn't flinch. I just really like the fight in this team."

For the second time in three games, Braxton Burnside blasted a pair of home runs, extending her team lead to eight on the season. Burnside has now gone deep in three consecutive games, including Friday's two-homer performance against Southeast Missouri.

"I'm just having a lot of confidence when I'm going up there and trusting the process," Burnside said. "So yeah, I guess you can see it looks like a beach ball coming in, because I'm just seeing it really well. And I think that's what we all did well this weekend, was seeing the ball, swinging at good pitches, and not helping their pitchers out in any way."

Mary Haff followed Friday's no-hitter against the Red Raiders (5-6), by shutting out the visitors again on Sunday, allowing just three hits and striking out four. She now has 43 strikeouts in 41 innings this season, with a stingy 0.68 earned run average. She has pitched four complete games with three shutouts.

"We can't speak highly enough about our pitching staff -- it's one of the best in the country," Burnside said. "Every game, we can always count on them to keep the opponents' score low. So if our bats stay hot and we continue to play good defense, I think we can beat anybody in the country."

Playing in a constant drizzle throughout the game, Arkansas was able to take advantage of a Red Raider throwing error to score the game's first run in the second inning. After Sam Torres laid down a sacrifice bunt, in an attempt to advance the runners, Tech pitcher Morgan Hornback fielded the ball and threw it over the first-baseman's head. Audrie LaValley scored to put the Razorbacks up, 1-0.

Burnside then started the Arkansas third inning with a solo shot down the left-field line, extending the lead to 2-0.

The top defensive play came in the top of the fourth inning when Tech's Yvonne Whaley lofted a ball to shallow center field. Arkansas' Keely Huffine sprinted forward and extended through the air to catch the ball just before if reached the grass.

Arkansas extended the cushion with four more runs in the fifth, including a three-run homer by Danielle Gibson, who followed a pair of singles by Hannah McEwen and Burnside. Kayla Green then ripped a double to right-center, bringing home Hannah Gammill for a 6-0 Arkansas lead. Gibson's three hits gave her 21 on the season – 10 for extra bases -- with a team-leading .429 batting average.

"Our team is just really dialed in on offense, right now," Deifel said. "We aren't really hitting it in the gaps, but we are hitting the long ball, so I'll take that as a trade-off. And more than anything, we are just having great at-bats. Even our outs have been productive. Doesn't matter the situation, we are swinging it confidently."

Burnside hit her second solo homer in the sixth inning, before Arkansas capped the scoring when LaValley was hit by a pitch with a bases-loaded, scoring Cally Kildow with the eighth run.

"This is just a fun team to watch, right now," Deifel said. "They are just doing so many things really well. So, hopefully we can keep that momentum going."