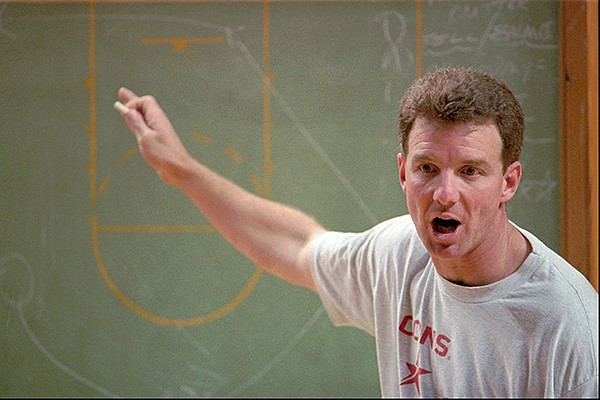 Brad Dunn spent 11 seasons as an assistant basketball coach at Arkansas from 1991-2002.

Brad Dunn and I have watched hundreds of baseball games together over the last two decades as co-workers at Hawgs Illustrated.

Mostly, we talk about family and fishing in those high-level meetings in the company’s baseball suite.

There are pointers on bass fishing from Brad, a real expert capable of placing in big-time tournaments. I’ll change the subject to fly fishing, to suggest the fly of the day for catching a big brown trout. There is detailed analysis on both bass and trout fishing that might bore our suite guests more interested in Razorback information.

But the man with the 1994 NCAA championship ring can still dissect a basketball game. As the Hogs jumped to No. 12 in The Associated Press Top 25 poll — the first time that high since Dunn was patrolling the sidelines on Nolan Richardson’s coaching staff – it was time for some expert analysis.

There is a reason I still address our ad sales man as "Coach Dunn."

Dunn was at both the Alabama and LSU games last week at the request of an old NBA friend. There were lots of potential draft picks on all three teams in those two games.

It was fun stuff for Dunn. It didn’t hurt that Arkansas won both games, rallying in the second half with what he thought was great strategy by second-year Arkansas coach Eric Musselman.

“What we’ve got is a great coach,” Dunn said. “(Alabama's) Nate Oates is going to win SEC coach of the year. He won the league. But our guy flat out out-coached him in that game. It was just great adjustments.”

With Alabama zooming to a lead early in the second half, there was a change in strategy involving 6-10 Arkansas freshman Jaylin Williams on the low post.

“I think Alabama was up four points and Williams got it on the baseline about 14 feet out,” Dunn said. “He bumped his man about three times and shot a soft little layup. He just flat out handled the guy.

“The next five trips the ball went to Williams. It wasn’t 14 feet on the low block. It was exactly 10 feet, all NBA sets. The fifth, they popped Williams to the elbow for a jumper and he hit that one, too.

“And with that the game turned on a dime. It was pure coaching, NBA stuff that Musselman is really good at seeing. He recognized what was working and exposed the other team.

“I was shocked it took him just one trip to see it and go to it that strong, but that’s how good he is at that kind of stuff. I thought, ‘This guy has an amazing eye.’ It’s wow stuff and we have such an advantage.”

Dunn is still a basketball coach at heart, but he’s the general manager at Hawgs Illustrated, our advertising sales director. I’m sure our clients get to hear a little basketball wisdom now and then. Hopefully, with covid-19 backing off, that happens more in the coming weeks.

I count myself lucky to just be able to phone him to learn what I didn’t see in the last basketball game, as I did today. I’m not a coach and the nuances slip past me like a big brown sailing down the White River.

There was one part of the Alabama game that didn’t elude me. I noticed great effort from the Arkansas team.

"Today's players, you have to stay after their butt because they have spent their entire career being told how good they are on the AAU circuit. Trust me on that.

It was on display in the Alabama game when the Razorbacks won 81-66.

“There was a loose ball and four of our five players were on the floor," Dunn said. "Moses Moody finally got it and he flipped it to Justin Smith and he did a chin up on the rim. That’s coaching. It’s effort.

“It just doesn’t happen all the time, so when you see four guys chasing a loose ball, that coach should get a tip of the cap.”

The Hogs didn’t have the same energy for the first half against LSU and trailed by 10 points early, and 37-32 at halftime.

The Razorbacks eventually built a 21-point lead in the second half and won 83-75.

“That’s typical, because it’s hard to come back from the emotional level of the Alabama victory,” Dunn said. “You see that all the time. But Musselman fixed that at halftime.

“LSU was running that zone, but it was a switching zone with man-to-man principles and Musselman ran his man stuff against it. He got his matchups.”

With that, Dunn changed the subject. He’d heard tales of a 28-inch brown trout caught by Louis Campbell, another ex-coach. The former football assistant for Bear Bryant, Danny Ford, Houston Nutt and others landed a fish-of-a-lifetime last Friday on the White River.

Yes, it was just like the Brad Dunn coaching analysis.