Hogs make most of 'Revenge Tour' 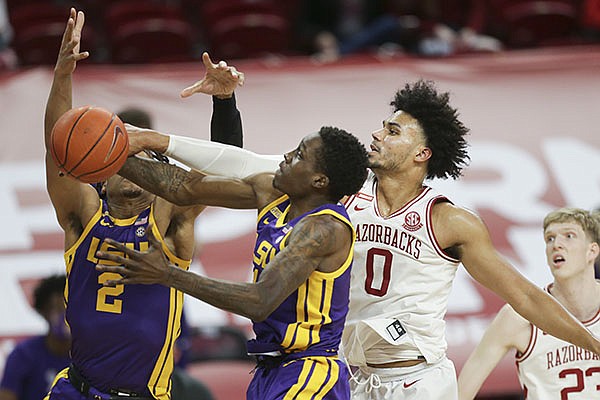 Arkansas' Justin Smith (0) attempts to block a shot during a game against LSU on Saturday, Feb. 27, 2021, in Fayetteville.

The No. 20 Razorbacks had home games against No. 6 Alabama and LSU after being pounded previously in back-to-back road games by the Tigers and Crimson Tide.

LSU beat the University of Arkansas 92-76 on Jan. 13 in the Maravich Assembly Center after taking a 44-13 lead in the first half. Then the Tide rolled the Razorbacks 90-59 in Coleman Coliseum on Jan. 16. Alabama was ahead 41-19 at halftime and led by as many as 36 points in the second half.

"Those games, when we lost to them, in the back of our minds we were like, 'Yeah, we're going to get both of them back,' " Arkansas junior guard JD Notae said.

The Razorbacks won both rematches in Walton Arena. They beat Alabama 81-66 on Wednesday night and LSU 83-75 on Saturday.

[Video not showing up above? Click here to watch » https://www.youtube.com/watch?v=1wLlPiM8WEw]

"I think we were embarrassed with our performance," Arkansas Coach Eric Musselman said of the first games against the Tigers and Tide. "I think we had that extra edge to ourselves.

"We had a group of guys and a coaching staff that was P.O.-ed. We didn't like how we played. We admitted that we got our butts kicked and we came back and we got another opportunity to play them.

"Even if we would have lost [Saturday], our disposition was much, much different in the second go-around with both of those teams we played [last week]. We had a completely different disposition from a toughness standpoint."

Arkansas senior forward Justin Smith missed the first LSU game as he continued to recover from surgery on right ankle.

Smith was back in the lineup at Alabama after missing four games, but clearly was rusty and not in game condition after missing practice for two weeks. He had 5 points, 1 rebound and 3 turnovers in 18 minutes.

"Our scouting report said, 'Revenge Tour ends tonight,' and it did," Smith said after beating LSU. "We got our revenge."

Missouri's 81-68 victory at Arkansas on Jan. 2 was the first game Smith missed after undergoing surgery the previous day. The Razorbacks shot 26.8% percent from the field (19 of 71) in their only home loss this season

"Really disappointed," Musselman said after the game. "It's the worst home loss that I can ever remember being a part of."

The victory at Missouri marked the first time Arkansas had beaten a top 10 team on the road since 2006 when the Razorbacks won 73-69 at No. 10 Tennessee.

"Those were the three games this year that we were not happy with our performance," Musselman said of losing to Missouri, LSU and Tennessee the first time around.

Asked about the "Revenge Tour" inspiration, Musselman said the coaching staff wants to emphasize certain things to the players before games.

"We kind of dubbed these [Alabama and LSU] games as a 'Revenge Tour' or a 'Revenge Week.' Spliced in a couple of movie clips on stuff that would have to do with that."

Musselman said of the clips are from "Cobra Kai," a Netflix series focused on martial arts that Musselman enjoys watching with his wife, Danyelle, and daughter, Mariah.

"It's a good, friendly takeoff of 'The Karate Kid,' " Musselman said. "I highly recommend it. My family and I have watched every episode.

"When I see a good phrase, I tell Danyelle to pause it and rewind it. I get it on my phone, I get it to [special assistant] Hays Myers and then he splices it into a video clip."

Musselman said that before the Alabama rematch, the staff showed the Razorbacks a video of headlines from game stories when Arkansas lost at Alabama.

"Then we followed it up with what we wanted the headlines to be after the game," he said. "They seemed to like it."

The Razorbacks have won nine consecutive conference games since losing at Alabama.

"I guess the way that the season had gone prior to that, we enjoyed it," Smith said of being able to play Alabama and LSU in consecutive home games. "Would we have liked the games early in the season to go better? Probably.

"But the way that we're playing now, I think it's just building blocks, and I think it's going to pay dividends in the long run having these two tough games back to back at the end of the season going into the postseason."