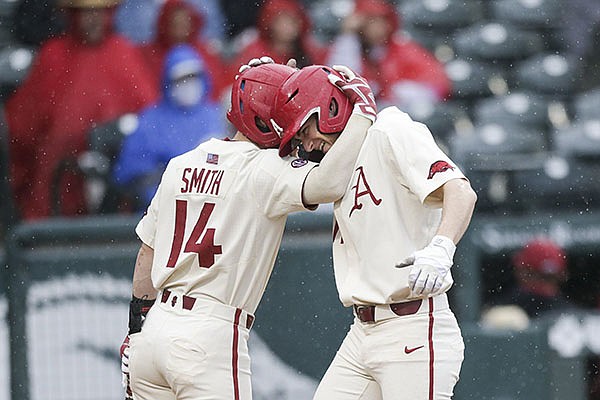 Arkansas' Cullen Smith (14) and Brady Slavens embrace after Slavens hit a home run during a game against Southeast Missouri State on Sunday, Feb. 28, 2021, in Fayetteville.

FAYETTEVILLE — The University of Arkansas only got to hit for four innings on Sunday, but that was all the No. 8 Razorbacks needed to wallop Southeast Missouri State 11-4 in a rain-shortened affair to complete a four-game sweep.

Arkansas (7-0) racked up as many hits (12) as outs, including home runs by Matt Goodheart, Cayden Wallace and Brady Slavens against the Redhawks (2-5), whose injury-impacted bullpen was feeling the strain.

The Razorbacks raked nine extra-base hits and raised their batting average 23 percentage points from .268 to .291 with the outburst before a crowd of 4,218 at Baum-Walker Stadium. After being held off the board by SEMO right-hander Austin Williams in the first inning, Arkansas erupted for 3, 2 and 6 runs the next three innings as the rains came, leading to a sloppy field.

The umpiring crew had the tarp brought out as soon as the Redhawks batted in the top of the fifth inning, making it an official game, and the decision to call the game came soon thereafter.

"Obviously the conditions on the field were pretty bad. Really from about the second inning on, it started getting slick on the mound," Arkansas coach Dave Van Horn said. "Both pitchers were having trouble with their front plant foot.

"I just feel like both teams were struggling out there. Really the decision at the end of the game was just the surface was getting so slick on the turns. Coming around first, second and third, I think both coaches were starting to get really concerned about somebody hurting their knee."

The conditions likely contributed to a high throw from SEMO pitcher Connery O'Donnell on a tapper by Arkansas catcher Casey Opitz that led to his collision with first baseman Austin Blazevic in the third inning.

Opitz was knocked backward onto the back of his head and injured a wrist in the fall, though Van Horn said he thought the All-Southeastern Conference catcher would be OK.

The Razorbacks will have a chance to rise to No. 1 in the nation in at least one poll today after opening 7-0 for the first time since 2015.

"I feel good about where we're at," Van Horn said. "We knew this was going to be a tough stretch. When you take a step back from the schedule, when they started the first tournament we went to on Saturday, all of a sudden you're looking at seven games in nine days against some good teams. Southeast Missouri, they might win their league honestly.

"Obviously, the bottom line is you need to win games, and we've been winning them. Whether we played real well or just OK, we found a way to win a couple games where we were behind these first seven."

Slavens doubled and hit his third home run to tie Christian Franklin for the team lead, and joined Goodheart, Wallace and Jalen Battles with two hits each to lead the Razorbacks, who do not have a mid-week game before facing Murray State this weekend.

SEMO scored in the third, fourth and fifth innings but could not keep the pace with Arkansas, which used three pitchers in lefty starter Lael Lockhart, and relievers Caden Monke and Kevin Kopps (1-0).

Lockhart had a strong first inning, then coaxed a double play out of Danny Wright to get out of the second inning still facing the minimum number of batters.

But the rain was picking up and he issued a couple of walks in the third inning and an RBI groundout. Lockhart came out after giving up Ty Stauss' two-run single in the fourth inning.

"The first inning he threw extremely well," said Van Horn, who was the only Razorback to participate in post-game interviews. "Maybe the best inning he's had. His velocity was up, command was great, breaking ball, fastball, he was really good. The next couple of innings it was kind of scattered and raining pretty good."

Wallace and Slavens opened the bottom of the second with back-to-back home runs off Williams (0-1) a native of Judsonia and a White County Central graduate. Opitz doubled with one out and scored on Battles' single to make it 3-0 and chase Williams.

Slavens, who reached base in all three of his at-bats, walked with two outs in the third inning and scored on Cullen Smith's double. Smith made it 5-1 by scoring on the Opitz ground ball that led to O'Donnell's throwing error.

Jevon Mason walked twice and scored two runs for the Redhawks, and Blazevic homered off Kopps to end the scoring in the fifth.

Robert Moore doubled to ignite the Arkansas fourth. The inning was highlighted by Goodheart's first home run in his second start of the season, back-to-back doubles by Wallace and Slavens, an RBI single by left fielder Ethan Bates in his first start, and an RBI double by Battles, whose eight runs batted in tied Slavens for the team lead.