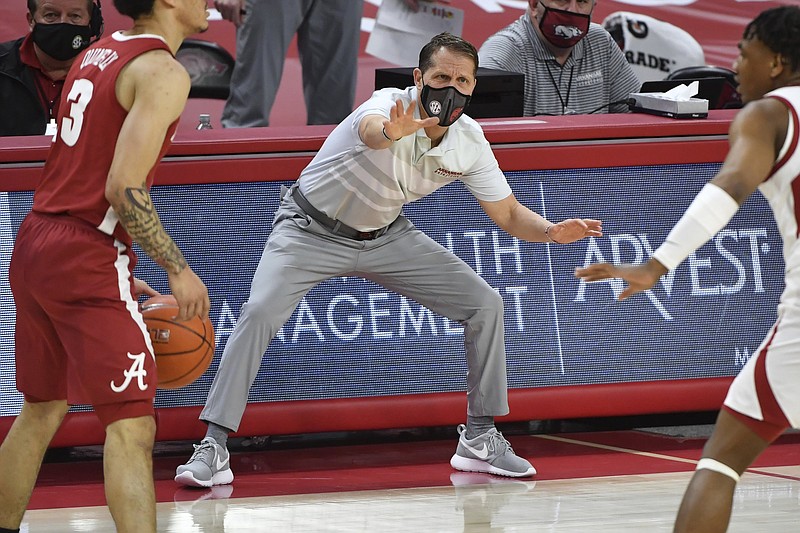 Arkansas coach Eric Musselman reacts to a play against Alabama during the first half of an NCAA college basketball game in Fayetteville, Ark. Wednesday, Feb. 24, 2021. (AP Photo/Michael Woods)

The Razorbacks won their ninth consecutive SEC game on Saturday, an 83-75 home victory over LSU, to improve to 19-5. Arkansas is 11-4 and in second place in the SEC and has clinched a double-bye for next week's SEC Tournament in Nashville, Tenn.

Musselman is in the second year of his original contract, which pays $2.5 million per year.

After Alabama Coach Nate Oats recently agreed to a deal worth $3.237 million per year, Musselman dropped to 13th in the SEC in head coaches' pay among the conference's public universities, based on the USA Today database of head coach salaries in Division I.

Vanderbilt Coach Jerry Stackhouse's salary hasn't been reported because he works at a private university that isn't subject to open records requests.

"My philosophy is that Eric and I will sit down together at the end of the season, when that's over, and talk about what his contract looks like and what's important to him moving forward," Yurachek said. "His agent and I have talked behind the scenes about that.

"I like to sit down with the coaches and find out what's important to them. We're all on the same page: Eric Musselman, Hunter Yurachek and his agent, Jordan Bazant. And that's how we will proceed."

The Razorbacks were 20-12 in Musselman's first season, including 12-1 in nonconference play. Arkansas had defeated Vanderbilt 86-73 in a first-round SEC Tournament game when the covid-19 pandemic shut down college basketball.

Musselman added a highly regarded class of freshmen to key graduate transfers and the returning roster and molded this season's team into a contender for a top 4 seed in the NCAA Tournament.

Musselman's current contract allows for two automatic one-year extensions for reaching the NCAA Tournament, along with two raises of $100,000 each. Any new agreement is likely to include both a pay raise and an extension.

"I'm not worried about Eric Musselman leaving the University of Arkansas," Yurachek said. "I think him and his family love it here. With that said, Eric Musselman has earned the opportunity for him and I to sit down and to seriously talk about what his contract looks like moving forward."

Arkansas moved up eight spots to No. 12 in the latest Associated Press poll released on Monday. It's the highest ranking for the Razorbacks since the 1997-98 season, when they also were No. 12 in the AP poll.

It's the biggest jump for Arkansas in the AP poll, according to HogStats.com, since December of 1992 when the Razorbacks went from being unranked to No. 12 after they beat No. 8 Memphis 81-76 in Barnhill Arena and won at No. 9 Arizona 86-80.

Arkansas debuted in this season's AP poll at No. 24 two weeks ago, the first ranking for the Razorbacks since 2018.

Arkansas guard Moses Moody was named SEC freshman of the week, the conference office announced Monday, after he averaged 21.0 points, 6.5 rebounds and 4.5 assists in victories over No. 6 Alabama and LSU.

Moody did most of his scoring at the free throw line, where he hit 16 of 19 against Alabama and 11 of 13 against LSU.

It's the second SEC freshman of the week recognition for Moody, who is from Little Rock.

The South Carolina team Arkansas faces tonight in Colonial Life Arena has many of the same players who beat the Razorbacks 79-77 in Walton Arena last season. The Gamecocks have four players who started in that game with A.J. Lawson, Keyshawn Bryant, Justin Minaya and Jermaine Cousinard. Another key returnee is Trae Hannibal.

"Normally when we end a game and go into the next prep, it takes me a long time to maybe catch up on their top seven or whatever," Arkansas Coach Eric Musselman said. "This is a team that I know some of their personnel.

"Obviously I've got to get better at understanding tendencies and stuff as we get started to dive into our prep work, but they've got a lot of guys back."

Arkansas is 3-0 in SEC games played on Tuesday night with victories over Mississippi State 61-45 at home, at Kentucky 81-80 and over Florida 75-64 at home.

The Razorbacks beat Mississippi State and Florida after having played the previous Saturday. They had a week to prepare for Kentucky after Texas A&M postponed its game at Arkansas because of covid-19 issues within the Aggies' program.

Arkansas is 4-4 on the road this season with victories at Auburn, Vanderbilt, Kentucky and Missouri. The road losses have been at Tennessee, LSU, Alabama and Oklahoma State.

Tonight will be Arkansas' final road game of the season. The Razorbacks' game at Texas A&M that was postponed by the Aggies won't be made up.

Arkansas is going for its fourth consecutive SEC road victory tonight. The Razorbacks haven't won four in a row on the road in conference play since 1995 at Vanderbilt, Alabama, LSU and Florida.