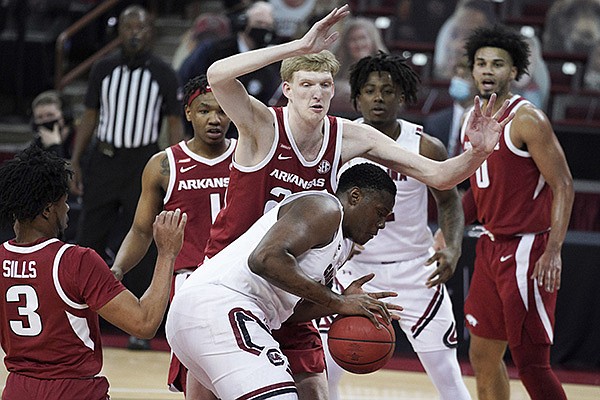 For 35-plus years, South Carolina coach Frank Martin has been known as a fighter, and his teams are known for their toughness.

“We just got run out of the gym,” Martin said. “Defensively, we just didn’t put up any fight or any resistance. Offensively, we played selfishly, which going into the game was all we spoke about – don’t take bad shots, because when you do they score every time. That is all we did was take bad shots.

“We just got run out of the gym. They are good and we had no answer for them tonight.”

That is the most conference wins in a row for an Arkansas team since the 1993-94 season when the Razorbacks won 12 straight against SEC competition, including one game at the SEC Tournament.

Martin was impressed with Moody, who also had seven rebounds and zero turnovers in 34 minutes.

“Real good player,” Martin said. “I mean, real good player. We made it really easy for him. I don’t think he even broke a sweat trying to score. We were undisciplined. We gambled off of him.

“I thought early we tried to attack the rim but there’s a 7-3 guy standing right in front of the rim,” Martin said “If you go in there and you kind of half jump and turn your body sideways and kind of flick it over your head, you’re not going to score.

Arkansas, which led 49-32 at halftime, faced a zone defense to begin the game and seemed to really come alive once South Carolina switched to a man-to-man defense.

“Early in that game we were in that zone and they were kind of standing around trying to figure out how to attack the zone,” Martin said. “Then we went man and when we went man they came at us and we put up zero fight. Then when we went back to zone they had that aggression going and they just kept going at our zone and our man.

"We had just no resolve defensively.”

South Carolina, who Martin led to the Final Four in 2017, has two SEC wins over Georgia this season, one over Florida and another over Texas A&M.

But the Gamecocks were 1-7 in their last eight games.

“It is just one of them years, man,” Martin said. “We have got good parts and when the parts play well together, we represent our team the right way. Obviously more times than not, our parts have not connected.

“We have got a lot of guys that are playing for me and not we and that’s unfortunate. We have got to continue to try and figure it out. Because basically a year ago with the same personnel, that was not the case."

Martin seemed to indicate there are some off-court issues.

“This has just been a confusing year all the way around," Martin said. "It has caught me off guard. I didn’t expect some of the stuff that we're dealing with and I ain’t talking about covid. It’s team stuff.

Martin was asked if it is too late to fix the problems with the SEC Tournament in Nashville, Tenn., looming next week.

“I have got upperclassmen and we are playing like this right now so I don’t have an answer for you," Martin said. “Selfish basketball has never been a trademark of my team. This is year 36 or 37 and getting out of the way has never been a trademark of my team...and this is the first time that we don’t fight defensively this year. I ain’t talking tonight, this year. And we play disjointed on offense.”

Martin’s team have been described in the past as physical, tough ones that win ugly games.

“People might not like how my teams play, but those two things have never been a part of any team that I have ever been associated with - that’s selfish offense and getting out of the way defensively,” Martin said. “We do that this year at times and it is really frustrating. I’m telling you this group of guys has not done it before.”