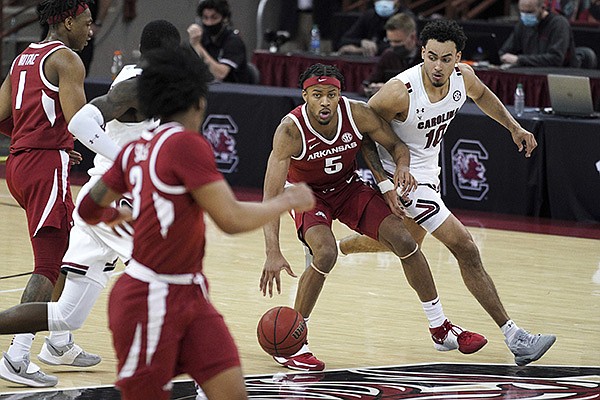 Moses Moody's ability to get to the free-throw line enabled him to keep scoring at a high clip the previous three games, but the University of Arkansas freshman had struggled to make shots from the field.

The mini-shooting slump ended for Moody on Tuesday night when the 6-6 guard from Little Rock had 28 points, 7 rebounds and 2 assists to lead the No. 12 Razorbacks to a 101-73 victory over South Carolina at Colonial Life Arena in Columbia, S.C.

Moody hit 10 of 15 shots -- more field goals than he had the previous three games combined when he was 9 of 40 against Florida, Alabama and LSU. Hitting 33 of 40 free throws in those games allowed Moody to average 18.7 points.

"He just opens up the floor for us so much," Arkansas Coach Eric Musselman said. "He never really takes a bad shot. It's hard for a player to go 10 of 15 from the field."

Moody was 4 of 4 on free throws against South Carolina but did most of his damage from the field, including hitting 4 of 9 three-pointers.

"Real good player," South Carolina Coach Frank Martin said. "I mean, real good player. We made it really easy for him. I don't think he even broke a sweat trying to score."

Moody is projected as a first-round pick in the 2021 NBA Draft.

"He's playing at an incredible level," Musselman said. "He's the last one out of breakfast today, watching film and studying everything he can. He's just so mature beyond his years as far as preparation goes, and then when he's in practice, post-practice, pre-practice.

"He doesn't say much. He comes in and just does his work. He reminds me of a veteran at the next level the way he approaches the game."

"Just trusting the process," Moody said. "I don't change anything when I go through a [shooting] drought. I just keep the same mentality. Keep the same workout. The results will come."

The Razorbacks (20-5, 12-4 SEC) clinched the No. 2 seed in the SEC Tournament and won their 10th consecutive conference game. It's the longest SEC regular-season winning streak for Arkansas since the 1994 national championship team won 11 in a row.

"Really proud of the way that we performed after a really emotional week," Musselman said, referring to payback victories over Alabama and LSU last week. "I thought tonight was as good as any game we've played all year."

"We just got run out of the gym," Martin said. "They're good and we had no answer for them tonight."

The Razorbacks won four consecutive SEC road games for the first time since 1995.

"I'm just worried about how we beat Texas A&M," Musselman said looking ahead to Saturday's regular-season finale in Walton Arena. "I think the guys have done a great job being ready to play every single night.

"We haven't had letdowns. We stunk for two games this year [at LSU and Alabama] and we figured out a way to bounce back, put those things behind us. We're going to put this game behind us and get ready for Texas A&M."

Moody might have scored 30 points, but Musselman took him out with 3:25 left and Arkansas ahead 94-63.

"It's all good," Moody said. "If I don't have to play, you know, protect my body. We're going into a pretty long stretch going into the SEC Tournament, and the NCAA Tournament is coming soon."

Moody matched his season-high with 28 points at Alabama on Jan. 16, when he was about the only bright spot for Arkansas in a 90-59 loss to the Crimson Tide. Against South Carolina, he had plenty of help.

"We ran some plays for him tonight," Musselman said. "We had him handling it in pick and roll. We posted him up in the mid-post a couple of times.

"He's so unselfish. He moves the ball. He only had one turnover tonight, and he played 34 minutes. I think his teammates look to him to be a guy that can stabilize us."

"Desi's shot selection was incredible," Musselman said. "I thought Desi was really focused and got his feet set on those threes.

"It's hard in the college game to take seven threes and make five of them. It's hard to do that in the gym standing alone, let alone with defense on you."

The Razorbacks hit 15 of 33 three-pointers.

"We didn't over-emphasize the three," Musselman said. "But I did think that we were going to be able to get more three-ball looks.

"I think the interior of South Carolina's defense is really physical, so naturally our guys felt if we could swing the zone and make the ball change sides of the floor that we would get some open looks."