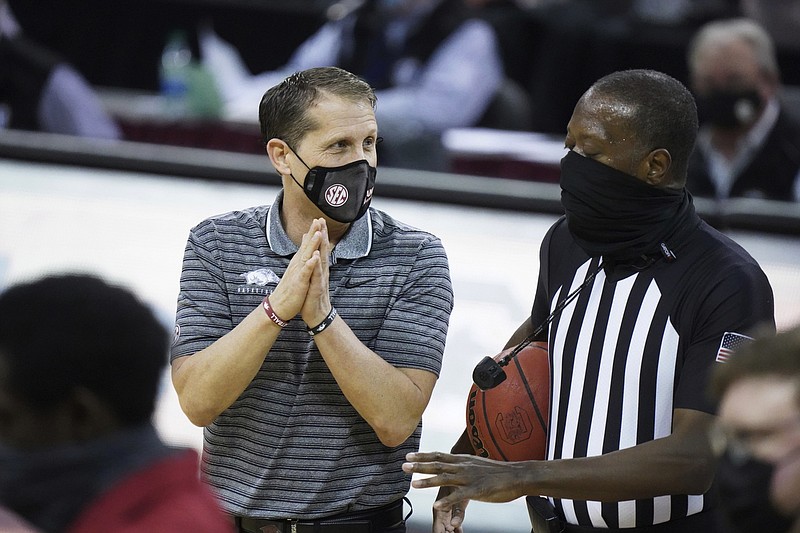 Arkansas coach Eric Musselman talks with an official during the first half of the team's NCAA college basketball game against South Carolina on Tuesday, March 2, 2021, in Columbia, S.C. (AP Photo/Sean Rayford)

Musselman became the first Arkansas coach to win 20-plus games in each of his first two seasons. He also extended his streak of six consecutive years with 20 or more wins, having accomplished that feat in all four of his seasons at Nevada.

The 20-win plateau is extra special for Musselman.

“If we didn’t get 20-plus wins this year, I don’t know where my wife [Danyelle] would put me for the whole summer, because that’s been a goal every year since we’ve been in college that she reminds me of daily,” Musselman said. “For that, I’m happy that at least somewhat of the summer will be pleasant that I don’t have to hear her talk about that number.

“But in a covid year, in all seriousness, to get to 20 wins, I think across college basketball, any team that gets to 20 wins is going to be really impressive on their resume when we look back in time because everybody’s only playing 27 regular-season games.”

“I think our team is playing at a high level and they all believe in one another, and I think right now, collectively, I don’t know if I’ve been around a team that’s had this much momentum,” Coach Eric Musselman said.

“Just defensively, early in that game we were in that zone and they were kind of standing around trying to figure out how to attack the zone,” Martin said. “Then we went man and when we went man they came at us and we put up zero fight. Then when we went back to zone, they had that aggression going and they just kept going at our zone, and our man, and we had just no resolve defensively.”

Arkansas guard Desi Sills went off with a 5-of-7 shooting night from three-point range to break out of an extended shooting slump.

Sills was 5 of 17 from the field over the last six games and had not made more than one three-pointer in a game since going 2 of 5 in a loss at LSU on Jan. 13. Since that game, the left-hander from Jonesboro had been 3 of 18 from beyond the arc.

“It felt great to see my shot fall,” Sills said. “When you’re in a slump and you stayed in the gym no matter if you’re playing or not, the work is always going to come back and it pays off. It paid off tonight. No matter what I’m going through, I’m going to stay in the gym and stay consistent with my work, because I believe in hard work.”

Sills finished with 15 points in 26 minutes, his highest point total since scoring 22 against Auburn on Jan. 30.

Arkansas connected on 15 of 33 three-point shots for its biggest production from three-point land since making 20 of 40 in a 142-62 win over Mississippi Valley in the season opener.

The Razorbacks had not made more than nine three-pointers in a game since going 12 of 21 in a 99-69 win over Georgia on Jan. 9.

Arkansas freshman Jaylin Williams did not accompany the team to Columbia, S.C., for an undisclosed reason, and Coach Eric Musselman gave no specifics after the game.

“Jaylin was unavailable tonight, and that’s the end of the comment on Jaylin right now,” Musselman said.

South Carolina guard Keyshawn Bryant drove on Moses Moody and decided to challenge 7-3 Connor Vanover in the paint with a floater on the game’s first possession.

It didn’t work out well, as Vanover blocked his shot and rebounded it to set up the Razorbacks’ first field goal from Moody. Vanover finished with four blocked shots.

South Carolina Coach Frank Martin said he was not pleased with his team’s execution, saying they took bad shot after bad shot.

“I thought early we tried to attack the rim, but there’s a 7-3 guy standing right in front of the rim,” Martin said. “If you go in there and you kind of half-jump and turn your body sideways and kind of flick it over your head, you’re not going to score.”

Moody’s first made free throw in the second half gave him 117 for the season, passing the freshman record he held with Reid.

Moody finished 4 of 4 at the stripe to bring his record total to 120.

South Carolina guard AJ Lawson, trying to save an errant pass while going out of bounds on the baseline, threw the ball behind his back right at Coach Frank Martin, who was standing by his chair. Martin dropped the pass, which hit him in both hands, but nonchalantly reached over and grabbed a bottle of water from an ice chest.

• JD Notae made a three-pointer from the left corner at the 15:52 mark with an assist from Moses Moody to extend the Razorbacks’ streak of games with a made three-pointer to 1,068.

• Arkansas went with the lineup of guards Jalen Tate, Moses Moody and Davonte Davis, and forwards Justin Smith and Connor Vanover for the seventh consecutive game.