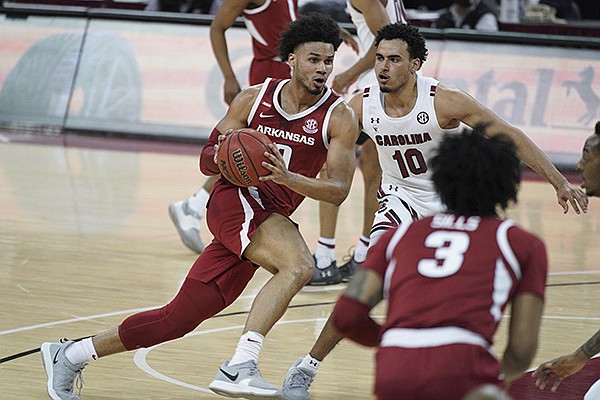 It wasn’t a contest.

It wasn’t really much of a game.

Arkansas was a well-oiled machine ready to race and South Carolina was more like a rent-a-win than an SEC opponent.

The Gamecocks just didn’t have any answers for the multitude of questions Arkansas presented.

Moses Moody scored 28 points, hitting 10 of 15 shots, and he scored inside and out. He also grabbed seven rebounds.

Justin Smith, the senior graduate transfer from Indiana, had 22 points and eight rebounds.

The Hogs got 36 combined points from JD Notae and Desi Sills off the bench.

Notae, who averages more shots per minute than anyone on the team, hit 9 of 16 attempts to score 21 points, and Sills made 5 of 7 three-pointers for his 15 points.

Arkansas scored first and last and a bunch of times in between.

Their previous two games they made 50 of 74 free throws while avenging losses to Alabama and LSU, but Tuesday they made just 12 of 13. They did their scoring from all over the court.

In mid-December through early January, the Gamecocks canceled or postponed seven games because of covid-19 issues, but they have been playing and practicing for nearly two months.

Although it didn’t look like it against the Hogs.

Arkansas’ first half was almost scary, at least for any team that has to face UA in the NCAA Tournament.

Earlier this season, physical teams gave the Razorbacks problems. That didn’t happen vs. South Carolina, definitely not in the first half when the Hogs bolted to a 49-32 lead.

They did it in a way they rarely win — with the long ball.

Arkansas shot 20 threes in the opening half and made 10, with Moody hitting three and Sills bursting out of a slump by hitting his first four three-pointers. JD Notae added two and Connor Vanover one.

Late in the first half, with the Hogs up 38-25, Musselman gave Moody a rest. Coming out of a TV timeout, the Gamecocks got two unanswered field goals and Moody was back in action.

All total in the first half, the Hogs attempted 33 shots and made 18 (54.5%) and had 10 assists, which has become the norm for this team during a 10-game SEC winning streak.

Share the ball with crisp passes, make smart decisions and they win.

They had 17 assists total, and generally when they have 12 or more they win. If they have fewer, it is because of too much shooting without passing the ball.

This team has become reminiscent of the old Hogs who no one wanted to play. They don’t have a swagger yet, but they have developed an incredible chemistry.

For all practical purposes, it appears the Razorbacks are improving with every game.

They are peaking at a time when every coach in America wants his team to be hitting high gear.

Scoring 101 on anyone is an accomplishment, even against South Carolina, which is in next to last place with a 2-7 conference record.

That’s the fewest wins in the SEC, but Vanderbilt has 11 losses.

Arkansas has one more regular-season game this Saturday at home against Texas A&M, which has been out with covid-19 issues for most of the Razorbacks’ 10-game SEC winning streak.