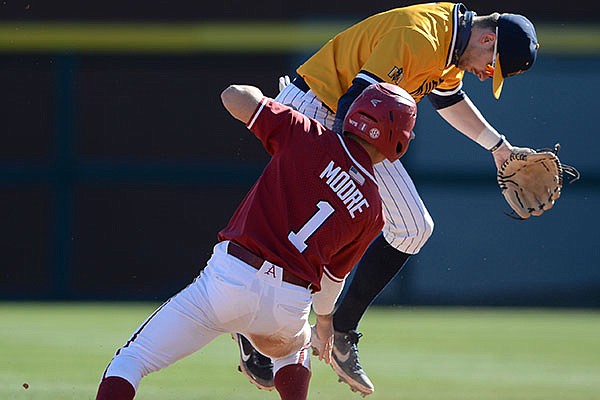 Arkansas second baseman Robert Moore (right) slides in safely at second Saturday, March 6, 2021, as he collides with Murray State second baseman Jordan Cozart who misplays the throw from the plate during the sixth inning of the Hogs’ 11-6 win at Baum-Walker Stadium in Fayetteville.

FORECAST According to the National Weather Service, it will be sunny with a high of 65 degrees Sunday in Fayetteville.

NOTABLE Arkansas has won the first two games of the series by scores of 7-6 and 11-6. The Racers have led by at least three runs in each game....Murray State is Arkansas' second consecutive opponent from the Ohio Valley Conference. The Racers were picked to finish third in the OVC this season by league coaches....Murray State second baseman Jordan Cozart entered the Arkansas series with a .387 batting average. Cozart has 4 doubles, 3 home runs and 8 RBI through 8 games....Murray State starting pitcher Jack Wenninger struck out seven batters in five scoreless innings against Purdue Fort Wayne last week....Murray State head coach Dan Skirka was an assistant coach at Ouachita Baptist in Arkadelphia in 2009....Arkansas and Murray State are playing for the first time since the Razorbacks defeated the Racers twice in May 1986 at George Cole Field....Arkansas' record is 114-21 at home since the start of the 2017 season....The Razorbacks are ranked No. 1 in the USA Today Baseball Coaches Poll for the first time since 2013. Arkansas lost its final four games as the top-ranked team that season....Arkansas' 13-game win streak is tied for the program's longest since a 13-game win streak in 2010....Attendance restrictions remain in place for the Razorbacks' baseball games and crowds will be capped at 4,200 for this weekend's games. Arkansas Gov. Asa Hutchinson said last week he was lifting most public health directives, with the exception of a mask mandate.